"The sun is gonna shine again: The rose is gonna live again."


The passion of my life is being a voice for my dear Iranian friends. Four years ago, I published a novel depicting the dangerous life of an Iranian freedom fighter named Bahareh. The name of the novel was "The rose of Nowruz: dreams of hope and freedom."
Bahareh was a concert violinist who became a powerful freedom fighter after witnessing a horrible scene on the streets of Tehran from her bedroom window.
The novel opens with that scene while Bahareh is practicing her violin. 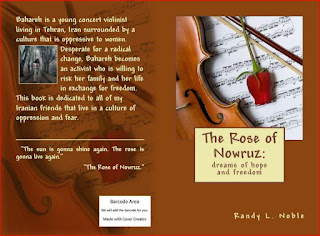 "Bahareh continued to play her violin with passion and precision. The beautiful notes soared through the air of her tiny, quiet bedroom and out through the open window into Englehab street. In her mind’s eye, Bahareh could see the faces of her friends. They were laughing, smiling, rejoicing and having fun. Women were free to walk the streets without wearing their hijabs. There was an incredible celebration in the streets of Iran. There was no more violence or protests or arrests! The streets were filled with Iranians celebrating life once again.

“Take your hands off of me! Leave me alone. Help!”

The sounds of desperate screams coming from the streets rudely interrupted the joyous sounds of Bahareh’s violin. She immediately stopped playing and set her violin down on the bed and ran toward the window. She lifted up the blinds and gazed down below on Englehab Street. A security officer dressed in a blue uniform was struggling with a young girl. The young girl was fighting for her life and trying to resist being arrested. Finally, another officer joined in the struggle and they both began dragging her toward a green and white van parked along the curb. It was the Gasht Ershad, once again out on the streets of Tehran. The Gasht Ershad was the “morality police” of Iran that daily patrolled the streets enforcing the Islamic dress code. A group of six Iranian police officers drove a green and white van daily to inspect men and women, making sure they were wearing proper clothing in compliance with the dress code. Most women, when they spotted the van on the street, would immediately take off running to avoid the frightening confrontation. Women were instructed to wear a hijab whenever going out publicly. They had to make sure that the hijab was properly put on so it would fully cover their hair. In some cases women would a chador that fully covered their whole body and arms. In the summer heat, this was very uncomfortable; so many women refused to wear it and instead would do their best to avoid the Gasht Ershad. Women had to make sure that their skin was fully covered by their clothing or else they would risk a nasty confrontation with the “morality police!” Displaying too much skin because of inadequate clothing could result in a fine or even an arrest. Women were forbidden to wear nail polish or too much make up publicly as this was not appropriate under strict Islamic law.
The law stated that a woman could not reveal her hair or ankles or wear loose-fitting trousers that would expose skin. Violators of the Islamic dress code resulted in both minor and serious consequences. A woman could receive a verbal warning by a female interrogator in the streets and be forced to sign a written agreement to dress more appropriately and explicitly follow the dress code. The more severe consequences resulted in women being lashed, imprisoned for up to three months and forced to attend special classes on respecting the rules. Bahareh watched in horror as the two security officers physically dragged the screaming and distraught young girl and finally forced her into the green and white parked van. Two young men who had been watching the violent scene, began pushing the officers demanding them to let her go. “Leave her alone you medieval bastards!!” one of the young men shouted in protest. One of the officers pulled out a large baton from his belt and began savagely beating the young man. Another officer joined in and soon the young man was sprawled out on the sidewalk with blood streaming down his face, no longer resisting. Bahareh could no longer watch the horror from her window. She covered her face with her hands and sat down on the bed next to her violin. The once beautiful song of hope that she had been playing had been silenced by the violent tactics of the Gasht Ershad. The rose had been silenced and crushed just like the lyrics to the chorus of her song. A Free Iran seemed so far away. Despair and depression like a dark cloud filled Bahareh’s mind. She sat on the edge of her bed and wept and began to doubt. Bahareh lifted her face out of her hands. The screaming and yelling had finally stopped. The crowd below her window had dispersed. The Gasht Ershad had arrested another woman and severely beat a young Iranian protestor. They were moving on now to another section of Tehran looking for more violators. 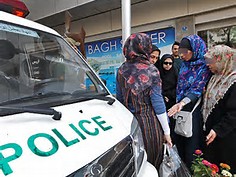 Bahareh wiped the tears from her eyes and stared down at her violin. She reached over and touched the strings with the tips of her fingers, whispering in a tearful voice,  “The sun is gonna shine again. The rose is gonna live again.”