Hassan Rouhani, Iran's new president: A moderate or a murderer?


My dear friend, Nasrin Mohammadi recently wrote an article concerning the installation of Iran's new president.
Here is her revealing article in her own words about who Rouhani really is!


I was born and raised in Iran under a regime that has degraded my nation and our values in life.
As a person who lost almost everything in her life in Iran, It breaks my heart to see that the US. Government ignores all values which our nation cherishes and plays a double standard with respect to other nations, specifically Iran.
It was so disappointing to see over 130 congressmen sign up for a talk with Islamic president Rouhani (so called president elect). I say “so called,” because there is no democratic election in Iran. Iranians are coerced to go to the voting polls under the threat that if they don’t they could lose their government benefits.
What were the reasons for your desperate 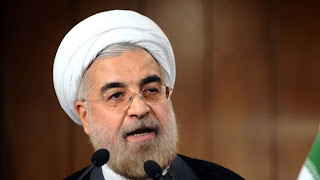 measures? Don’t you know who Rouhani is? He was one of the major players in oppressing Iranian dissidents from the early time of the revolution up to now.

Nobody knows better than me who lost her Brother (Akbar Mohammadi), arrested under Rouhani’s direct order and later killed in prison after serving seven years of incarceration.
Akbar was a non-violent political and human right activist, a voice of hope and freedom,  while studying at Tehran University.
Akbar was a caring person. He could not bear injustice and cruelty. He would donate his last pennies to others if he knew that they were in need.
Akbar was a brave, generous and a caring person.
On July 9th 1999, Akbar along with some friends tried to stop the security forces from entering the campus that were attacking students.
According to the recent article wrote by one of his cell mates, a prominent political prisoner Heshmat Tabarzadi said of Akbar  that, “he had three outstanding characteristics which made him the symbol of the student resistancae: bravery, truthfulness and resistance”
Tabarzadi also added that on his bravery it suffices to say when he was sentenced to death at the beginning of his trial; he started to prosecute the judge by undermining his legitimacy and made it the trial of the judge.
Akbar never exaggerated the extent of the tortures he endured.  He never recanted his beliefs or convictions while undergoing the most barbaric of tortures.
On July 30th 2006 Akbar finally died as the result of torture on the 8th day of his hunger strike.
Political prisoners along with student movement in Iran designated July 30 as, “National Student Resistance Day.”
Rouhani is one of the major players in killing Akbar and thousands more of Iranian people, while serving as the director of the National security.
Rouhani is now being inaugurated on the same day that he ordered the killing of Yaghoub Mehr Nahad, the first blogger in August of 2008.
The Late Mehr Nahad was a journalist, and the editor of the Mardom Salar news paper in Sistan and Balouchestan. He was hanged five years ago.
At the end I would like to say to Mr. President Obama that Iranian American people are watching those friends in need who are friends in deed.

"We are not your enemy: putting a face on real Iranians!"


"I feel bad when I see that most Americans don't know
about the real Iran.....
Arezoo


When you think about Iran, what are the first images that come to your mind?
Is is images of a hostile crowd holding up, "death to America" signs? Or is it terrorists who are "hell-bent" on the destruction of Israel and all other western nations?
Most of our conception and images of Iran are connected with the ongoing "media" coverage of the impending nuclear showdown between Iran and Israel. But is that really who Iran is?
Arezoo Hosseini, a 25 year old Nurse living in the city of Isfahan, laments the fact that most Americans don't know much of anything about the real Iran.
Arezoo is my dear online Facebook friend, that I regularly chat with. Recently when we met online, I informed Arezoo that I'm now doing a live blog talk radio program, speaking out for  the freedom and human rights all of my Iranian friends. When Arezoo heard about this, she became very excited and asked me if I would share with my listening audience who the real Iranians are. I promised her I would do just that and asked her if she would take some time to write a short story putting a face on real Iranians. Within two days, Arezooo sent me her response. As I began to read her short story, I was truly touched by her honesty and kindness. Arezoo made it very clear that she was not speaking for her government, but instead speaking up for all Iranians. Arezoo declared, "We love you Americans. We are not Terrorists!"
I can honestly testify that Arezoo's declaration that, "Iranians love Americans" 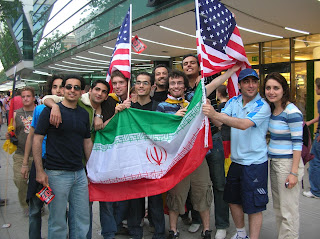 is absolutely true! I have spent over two years online chatting with Iranians! They are my best friends in the world! They are kind, hospitable and very respectful. They are not at all like the "hate crowd" that is portrayed by the ratings driven media. The real Iranian is a person who loves my country. They are desperate for the hope and freedom that is offered by America. The media is guilty of focusing on the nuclear showdown between Iran and Israel and ignores the desperate plight of the average Iranian living under the fear and oppression of a government who daily controls their lives.
Iranians are dear to my heart. I chat with them, pray with them and sometimes even cry with them.
These are real people with real hurts, frustrations and needs just like you and me. They want to be recognized for who they really are.
The best way to put a face on the real Iranian is to let Arezoo tell you herself. The following short story is plea from the heart of Arezoo for us to get to know the real Iran:

"I feel bad when I see that most Americans don't know about the real Iran.
They don't even know where Iran is located!
They don't even know that Iranians are the old Persians.
I'm not talking for my government. I am speaking for my people.
We love you Americans! We love all of the people living on this planet!
We are not your enemy! We are not terrorists!
We are the people who love humanity and fight for freedom.
We are not Arabs. We have our own history.
We are the great "children of Cyrus" who freed the slaves more than 2500 years ago and wrote the first charter of "human rights" for the nations of the world (The Cyrus Cylinder)
If you like poetry, Iran will be the best choice for you!
Here is the land of two great poets, Hafez and Khayam.
If you like history, Iran will be exciting for you. You can visit places that have existed for more than 7000 years.
I am sure that you will love Iranians. We are a people of great honesty and hospitality.

Arezoo's short little story touches me deeply. She wants to put a face on who Iranians really are and destroy the common stereotypes that are created by the media.
On my next blog talk radio program, I intend to read her story and be her voice!
I hope very soon one day that Americans will get to know the real Iranians.
They deserve our love and respect and most of all our prayers!