The cruel task of piggybacking in Iran.

This is the latest blog from my dear friend Mehnoush. Mehnoush is an Iranian refugee currently residing in Sweden and patient awaiting her residency from the Immigration board. She contributes personal articles to my radio program that describe the plight of Iranians desperate for freedom living under the iron fist of a dictatorship regime.


Life in the west of Iran which is tied to extreme poverty, calamity and bitter stories of the fate of the people trapped by a brutal, cruel regime, makes one wonder why a nation's welfare (back in Pahlavi Regime) contributed to jobs like piggybacking.

Sometimes the stories released about the piggy backer in Iran are so tragic that one may hardly believe a human being undergone such an extreme amount of pain and agony. Every day, we hear government's border officers murder one or two of these piggy backers throughout western border towns in Iran. These people are neither a trafficker nor a thief, they are only some poor, simple individuals tied up by a cruel, corrupted regime who are obliged to carry very heavy stuff on their back and get them to the other side of the borderline on foot. The income is so insignificant that can barely meet their daily needs.

It is noteworthy that on their way to the other side, they face several dangers like the government's border guards' shooting them, falling off the high rocks of the area and stepping on the mines from Iran-Iraq war period that have not been cleared yet within Iran's border towns. It has been reported that several piggy backers have lost their limbs walking over these mines. Interestingly enough, among these carriers there have been some educated young people and intellectual pioneers who have accepted to do such a job out of a desperate need of employment.

One of these young people is "Bagher Ahmadi". He has a master's in math’s and also holds the highest rank in PhD entrance university examination, yet he is one of the million young Kurdish people who sign up for such jobs due to the difficulties of life. 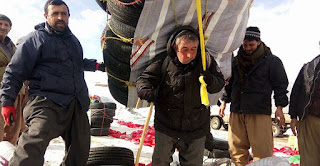 Another tragic example is the story about "Khezr". He is an old man with a daily income of about 10 to 15 dollars. Although suffering from a heart attack, he is the breadwinner of an eight-member family. Every day, he has to carry heavy goods uphill with the help of his cane to Iraqi Kurdistan in order to make ends meet.

These are only parts of the suffering in piggy backers’ lives who are obliged to carry very heavy stuff on their backs and reach their destination on foot. However "suffering" may not suffice to describe their situation trapped by such a cruel regime.

To the suffering people of Israel that were oppressed and burdened by the twisted version of God's law heaped upon them by the Pharisees and scribes, Jesus reached out to them in love and compassion, calling them to find their rest in him.