"The world should not be silent in the face of these executions.."
Hadi Ghaemi/dir,Int'l campaign for human rights in Iran

On Auguts 15, 2004, Atefah Sahaaleh was publicly hanged on on a boom crane in her hometown in Neka, Iran. The judge, Haji Rezai, who carried out the execution himself, was quoted as saying, "This will teach you to disobey!" Atefah was only 16 years old.
Iran is a signatory state to the International covenant on civil and political rights. Article 6.5 states that, "sentence of death shall not be imposed for crimes committed by person below 18 years of age."
Aricle 37 of the CRC (Covenant of the rights of a child) explicitly states, "Neither capital punishment nor life imprisonment without possibility of release, shall be imposed for offenses committed by persons below 18 years of age." 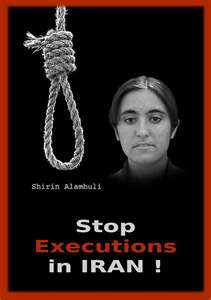 Yet in defiance to the international law and covenants, Iran continues to execute minors below the age of 18 for drug related crimes and crimes against chastity. The United Nations special rapporteurs on Iran have condemned the public executions of juveniles as a violation of their international obligations and is calling for a moratorium against this practice. Although the total number of child executions is unknown, as least three have been accounted for in 2011.
Iran continues to shock the world with its increasing number of human rights violations. Hundreds of journalists, political prisoners, filmmakers and accused spies fill their prison system. Most of them are denied access to lawyers and fair trials.
Hadi Ghaemi, Director of International campaign for human rights in Iran,summarizes the plight of Iranian children in a powerful proclamation:
"The world should not be silent in the face of these executions. Children are the most vulnerable members of society, the majority of these child offenders were either framed or suffer psychological illnesses and have no access to fair trials."
We must not remain silent, but speak out against the gross injustices and crimes against Iran's children. Atefah Sahaaleh was only 16 years old when she was publicly hanged. Will there be others? It's up to you and me!
Posted by Randy L. Noble at 9:21 AM No comments: