The future of Iran, 40 years later. What does the Bible say?

Since Khomeini seized power on February 1, 1979, The Iranian people have been prisoners in their own country. Iran has become "one big prison," with thousands of lives lost on the streets covered with blood without any hope of freedom. Yet the Bible promises a future of hope for the Iranian people in a powerful little prophecy hidden in the Book of Jeremiah. "Elam" will have a glorious future!
The following article is featured in our new book, "Dear God, please bring freedom to Iran," in both Kindle and paperback on Amazon.com.

On February 1, 1979, millions of desperate Iranians filled the streets of Tehran welcoming their new king from exile. The Ayatollah Khomeini stepped down from a 747 jumbo jet that had just arrived at the airport from Paris and proclaimed himself as the new leader of The Islamic Revolution. Iranians were emotionally overwhelmed and very hopeful that the Ayatollah would bring them the true freedom that they had been longing for now since the Shah and his family had went into exile in Egypt.

It has been 40 years since that historic moment in time and Iranians have gotten everything but true freedom.  The Islamic Republic of Iran has been one of the fiercest totalitarian governments in the Middle East. It has been forty, long and cruel years of oppression under a dictatorship that has replaced freedom with slavery to an ancient system of Sharia Law. There has been forty years of lies and deception, forty years of suppression of human rights, with no religious freedom, and no freedom of speech. Forty years of executions as the penalty for speaking out and disagreeing with the government. Forty years of women being covered and veiled and lashed for failure to adhere to the Islamic dress code. Forty years of the reign of Mullahs who rule your life from the cradle to the grave.

During the winter uprising of 2017, when Iranian protesters took to the streets in 70 cities demanding that the government get out of Syria and start taking care of them, there was a haunting chant that could be heard summing up the angry mood of the people, “The people are paupers while the Mullahs live like gods!”
The Iranian economy was in a death spiral due largely to the newly imposed sanctions by the Trump Administration. Instead of sharing the wealth with the people that was gained by the sanction’s relief from the Obama Administration, the Mullahs continued financing their terrorist connections and lived like kings while children slept in cardboard boxes out on the streets. Inflation, poverty, and homelessness saturated the landscape resulting in an increase of suicide from depression and despair. Iranians were desperate for freedom and longed for the glory days when the Persian empire flourished under kings who treated the people with tolerance and justice. One such King was King Cyrus who founded Persia by uniting the Iranian tribes of the Medes and Persians. Although Cyrus, who was known as a great conqueror, was most well known for his tolerance and magnanimous attitude toward those he defeated. When Cyrus conquered Babylon, he was greeted by the grateful cheers of the Jewish community, who welcomed him as a liberator. Cyrus is recognized from the pages of the Bible as being compassionate to the Jews and allowing them to return to their homeland to rebuild their temple. Respect and tolerance were the outstanding qualities of Cyrus who is credited for creating the first Charter of human rights known to mankind. Every October 29, thousands of Iranians pay respect at his grave celebrating King Cyrus Day.

Iranians are desperately searching for a leader, a liberator, a king like Cyrus who will free them from the oppression and tyranny and return their land to the glory of the Persian Empire. Although not as famous as the ancient King Cyrus, President Donald Trump has reached out to the Iranian people recognizing their right to have a free homeland once again. The Trump Administration has been supportive to Iranians and confronting the regime with their serious human rights violations. Iranians have responded with hope that Trump will be the world leader who will create the right circumstances for an overthrow of the evil regime that has oppressed and enslaved them for the past 40 years. They are rising up with hope and beginning to believe again that there is a future for Iran, a future with the promise of freedom and democracy. The burning question that must be answered is, “Is there a bright future for the Iranian people or will it be 40 more years of death and destruction?”

The key to answering this very important question is to first recognize that God is the sovereign Lord over history. Scripture provides the answer to this burning question.

“Praise the name of God forever, for he has all wisdom and power.
He controls the course of world events;
He removes kings and sets up other kings..”

Daniel 2:20 declares that God is sovereign and that he is the one who sets up kings and kingdoms and removes them for his providential purposes. Satan is not in control of this planet, but rather, as Scripture plainly teaches, God has the final say to the course of world events.
There is one powerful and insightful passage of Scripture in the Old Testament written more than 2,500 years ago that has tremendous insight into the future of the Iran. I believe that this scripture may very well hold the prophetic key for the future of all Iranians. Prophecy expert, Bill Salus, author of the exciting prophetic book, Nuclear showdown in Iran, comments extensively on this passage of Scripture. Mr. Salus has studied this prophecy in depth and offers what I believe is an exciting and thought-provoking revelation of Iran’s future!

“Ancient 2600-Year Old Prophecy Predicts Iran’s Future”
“Iran Has Double Trouble Ahead, Ezekiel 38 and Jeremiah 49”
Jeremiah issued his prophecies concerning Elam about 596 B.C. Jeremiah wrote about Elam about a decade before his contemporary Ezekiel prophesied about Persia in Ezekiel 38:5. Ezekiel’s ministry spanned between 595–573 b.c. Modern-day Iran is comprised of ancient Elam and Persia.

Ezekiel was familiar with Elam, according to Ezekiel 32: 24-25, but he did not include Elam in the lineup of invaders in Ezekiel 38. Elam was probably intentionally omitted, because it is the subject of its own distinctly different prophecy, outlined by Jeremiah.

Jeremiah 49:35, “Thus says the LORD of hosts: “Behold, I will break the bow of Elam, The foremost of their might.”
“Iran Continuing Ballistic Missile Program (ICBMs), Says UN Report”
— Israel National News, 5/16/14
“Israeli PM threatens to strike Iran: Benjamin Netanyahu says Israel may have to act against Tehran unilaterally to curb it from achieving its nuclear goal.”
— Al Jazeera, 7/17/13

The Elamites were warlike people and expert archers, according to Genesis 14:1-9 and Isaiah 22:6. Jeremiah predicts that Iran will suffer the fate of a broken bow, which might imply that the IRGC (Iran Revolutionary Guard Corp) will be unable to launch scores of Missiles at its enemies. Additionally, he declares that Iran will be struck at the foremost place of its might, which today could infer an attack upon its nuclear program. One of Iran’s most strategic and vulnerable nuclear targets is the Bushehr nuclear reactor, located in the heart of ancient Elam.

Presently, Israel has dual concerns about Iran’s military intentions. They are concerned about Iran’s quest to obtain nuclear weapons, and the rogue regime’s obsession with developing ICBM’s.
The Jerusalem Post quoted Israeli Prime Minister Benjamin Netanyahu on February 25, 2014, as saying to German Chancellor Merkle.
The goal is to prevent Iran from having the capability to manufacture and deliver nuclear weapons. I believe that means zero enrichment, zero centrifuges, zero plutonium, and of course an end to ICBM development. Because none of these elements —none of them—is necessary for developing civilian nuclear energy, which is what Iran has claimed that it wants.
Jeremiah 49:36, “Against Elam I will bring the four winds from the four quarters of heaven, and scatter them toward all those winds; There shall be no nations where the outcasts of Elam will not go.
“The Next Chernobyl?”
Bushehr, however, could turn out to be the most dangerous piece of Iran’s nuclear puzzle for another reason: haphazard planning and ongoing technical problems mean it could be the next Chernobyl, igniting a humanitarian disaster and explosive economic damage across the oil-rich region.
— New York Times, 1/2/13

Jeremiah informs us that the attack upon the ancient territory of Elam will produce numerous refugees, perhaps even turning into a humanitarian crisis. Exiles will be dispersed worldwide, as if being blown about by overpowering winds. Several studies conducted of the safety of the Bushehr nuclear site have concluded that an accident at the facility could result in such a disaster. Jeremiah 49:37 says
“For I will cause Elam to be dismayed before their enemies and before those who seek their life. I will bring disaster upon them, my fierce anger, says the LORD; And I will send the sword after them Until I have consumed them.”
“Iran: ‘Thousands of Missiles’ to Rain on Israel”
— World Net Daily, 8/28/13
“Saudi Arabia Displays Ballistic Missiles in Likely Display to Iran”
— National Journal 4/30/14
“Iranian Commander; We have Targets Within America”
— The Daily Caller, 2/1/14
Provoking the Lord’s Wrath
In addition to the Lord, Iran has other enemies in this prophecy. The headlines above depict a few of them. Each enemy, for varying reasons, seeks to prevent Iran from becoming a nuclear nation.
Additionally, Jeremiah says that Elam has stirred up the Lord’s anger, and that provokes the Lord to cause a severe disaster inside of Iran.
Perhaps this alludes to a nuclear disaster caused from a strike upon Iran’s Bushehr nuclear reactor. Nuclear Showdown in Iran explains how the present Iranian regime has fiercely angered the Lord.
Jeremiah 49: 38-39, “I will set My throne in Elam, and will destroy from there the king and the princes,” says the LORD. “But it shall come to pass in the latter days: I will bring back the captives of Elam,” says the LORD.
“Open Doors: Growth of Christianity in Iran ‘Explosive’”
— Christian Post, 3/23/12
“Greatest Christian Revival in the World in Iran”
— World Net Daily, 7/25/12 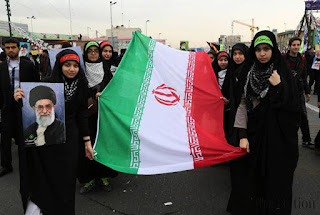 Jeremiah’s last two verses present the exiles of Jeremiah 49 with great news. Iranians who accept Christ in advance of his second coming will be returned from global exile into the restored fortunes of their historic homeland in Elam. Moreover, Jerusalem (Jeremiah 3:17) and Elam (Jeremiah 49:38) are the only two earthly locations identified in Scripture for the future establishment of the Lord’s throne.
Presently, several million Iranians have already become born-again believers in Christ. In fact, Iran has the fastest growing evangelical population in the world.  Multitudes of Iranians are accepting Jesus as their Savior through watching Christian satellite tv and experiencing miracles, dreams, visions and healings. This Christian back story is truly the big story of Jeremiah’s prophecy

Bill Salus has unraveled what I believe is a very key prophecy referring to the latter times. The Jeremiah prophecy refers to the latter times and has not yet been fulfilled. If Jeremiah 49 is really referring to the nation of Iran, there is hope for the Iranian people that have been scattered as refugees all over the world. God states that He will one day set his throne in the center of Elam. He will permanently establish his kingdom there in the midst of Iran.
Our book began with a fervent prayer to God to “please bring freedom to Iran.”  One day he will do just that. He has promised it and God cannot lie!