"Unless your repent, you will perish."
(Luke 13:5)
This year marks the hundredth anniversary of the tragic sinking of the Titanic. On April 15, 1912, The largest luxury liner in the world plunged into a watery grave in the north Atlantic claiming the lives of over 1500 passengers. Since this awful tragedy, what have we learned? I could speak out against the evil class distinctions on the Titanic, but there is something far more important to discuss. Captain Smith repeatedly ignored the iceberg warnings and as a result, the lives of many people perished. Almost two thousand years ago, Jesus issued a warning to his disciples, "Unless you repent, you too will perish."
The disciples shared a story with their master-teacher that Pilate had murdered several Galilean worshipers, implying that God allowed this to happen because they were worse sinners. Jesus didn't bother to explain why God allowed this evil act to happen, but instead pointed his finger at their spiritual condition. "You will perish too unless you repent of your sins and turn to God."
I can just see the faces of the disciples. They were probably speechless. They were used to Jesus kissing the babies and being gentle and loving. They must have been shocked that Jesus could be so straight forward and harsh. This is the problem the church faces today. We all want a Jesus to be meek and mild and non-confrontational. We want a" politically-correct" Jesus, but Jesus refuses to be squeezed into that mold. Jesus came to save us from our sins and because He loves us, He tells us the truth about our spiritual condition. 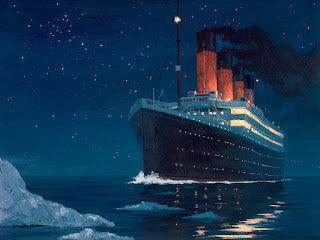 The most important thing God wants us to recognize is our need for salvation. We can cry out about injustices, evil and suffering and that all has its place, but God is issuing an "iceberg" warning to the world. If we ignore it, we do so at our own peril. Arrogance and pride was the downfall of the mighty Titanic. We need to learn a lesson from history. Jesus is the way, the truth and life. He is the lifeboat that all of us need.
Posted by Randy L. Noble at 10:53 PM No comments: