The Evil of Silence


"Silence in the face of evil is itself evil
God will not hold us guiltless.
Not to speak is to speak
Not to act is to act."
Dietrich Bonhoeffer


On April 9, 1945 Lutheran pastor and theologian, Dietrich Bonhoeffer was executed by hanging in The Flossenburg concentration camp just three weeks before the U.S. liberation. He had been arrested and convicted in a conspiracy assassination plot against Hitler. Eberhard Bethge, one of Bonhoeffer's students, writes of a man who witnessed the execution, quoting him as saying, "I saw Pastor Bonhoeffer, kneeling on the floor praying fervently to God. At the place of execution, he again said a short prayer, and then climbed the steps to the gallows, brave and composed. His death ensured after a few seconds. In the almost 50 years that I worked as a doctor, I have hardly ever seen a man die so completely submissive to the will of God."
Bonhoeffer loved God. He was not afraid to speak out. His life and ministry was dedicated to the Lordship of Christ. He sacrificed his reputation on the altar of submission at a time when the world was plunged into a bloody conflict with Germany and loudly proclaimed God's truth at the risk of his life. In his classic book, "The cost of discipleship, " Bonhoeffer issued a clarion call, a summons, to awaken the Christian Church out of slumber and back to obedience in following Jesus. He lived what he preached and at the end of his life, He set an example of what true submission and obedience to Christ looked like.
We live in a politically correct culture that is ashamed and afraid to speak the truth because it might offend others. On November 5, 2009, Nidal Hasan, a 39-year old Army psychiatrist, and practicing Muslim, opened fire on his fellow comrades, murdering 13 and injuring 30. Prior to opening fire, he  was heard screaming, the phrase, "Allah Akbar!"
After the shooting, a full investigation was conducted and the final verdict from the department of defense and the federal government was that the incident was the result of "workplace violence."
President Obama refused to label the tragedy as a result of terrorism but instead opted for the convenient, unoffensive phrase as, "workplace violence."
Our nation has plunged itself into a deadly mire of political correctness that sacrifices both the truth and our God-given gift of free speech, in order to satisfy the demands of living in a multi-cultural society. Our reputation has become our "god" and every day we sacrifice our rights and freedoms to this "demanding deity" to make sure that its not offended.
However, Bonhoeffer, surrounded by the pressures of war and death, would have nothing to do with this "politically correct deity." He proclaimed, "Silence in the face of evil is itself evil. God will not hold us guiltless. Not to speak is to speak. Not to act is to act."
For over 200 days, Saeed Abedini, American citizen and Calvary Church pastor, has suffered brutal beatings and torture in Evin Prison in Tehran, Iran for his Christian Faith. His condition continues to deteriorate as he suffers with internal bleeding and now kidney failure. Doctors refuse to treat him because they consider him "unclean," labeling him as an apostate for converting from Islam to Christianity 13 years ago. Saeed's human rights have severely violated. The ACLJ, The United Nations, His wife Naghmeh, and thousands of loyal followers on Facebook are working tirelessly, day and night, urging people to sign a petition for his release and to write Saeed encouraging letters.
Yet in all of this furious sacrificial activity, there is an ominous silence from the office of the most important leader of the free world, The President of the United States!
Why? Why has President Obama been so silent? Why has he seemingly refused to be a voice for Saeed, calling on Iran and demanding them to release an American citizen being held illegally in a brutal and dangerous prison?
Four years ago, President Obama called on Iran to release American journalist Roxana Saberi, who was charged with being a spy and held in Evin prison. Next he publicly spoke out for the release of three American hitchhikers, Sarah Shroud, Shane Bauer, and Joshua Fattal, who also were being held in Evin Prison.
Yet in the case of Saeed, there is total silence.
A dedicated father, husband, and pastor is fighting for his life in the most brutal prison in the world. His condition continues to deteriorate. A simple public declaration from President Obama  demanding Iran release an American citizen and return him to his precious wife and two children could mean the difference between life and death.
Bonhoeffer declared, "silence in the face of evil is itself evil."
Our nation desperately needs leaders with courage and conviction who have not been poisoned by the venom of political correctness and who are unafraid to stand in the face of evil with a pointed finger saying, "Listen to me!"
The writer of proverbs, admonishes us to raise our voices against injustice and to not be afraid of speaking out against evil,
"Speak out for those who cannot speak for themselves,
ensure justice for those being crushed."
(Proverbs 31:8)
Bonhoeffer was right. We have a solemn duty to be a voice against evil and to not keep silent. Our words and proclamations carry within them the very power of life and death.
Over 25 years ago, President Raegan, stood at the Berlin Wall and  courageously called on then Russian President Gorbachev to, "Tear down this wall!"
Gorbachev listened and the rest is history.
We need to follow the example of Reagan. With one united voice let us cry out to Obama, "Mr. President, Call on Iran to release Saeed!"
I pray to God that he hears our voices! 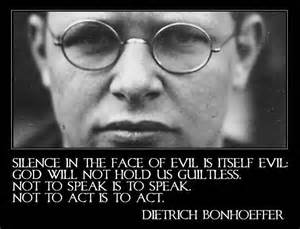