"The major differences between Islam and Christianity."

This is the latest blog written by my dear Iranian friend Mehnoush. Mehnoush is a human rights activist from Iran currently living in Sweden awaiting a decision for her residency. Mehnoush writes powerful articles about the struggles of  Iranians for freedom and democracy. In this new article she contrasts the major differences between Christianity and Islam. I have made some corrections with her English and sentence structures but what you are about to read is still in her own words.

"The Difference between Islam and Christianity"

Christianity is not a religion, but instead it is a love relationship with God through Jesus Christ. In comparison to Islam, Christianity is not a religious duty filled with man made rituals and endless laws that must be followed to the letter, but instead it is a passionate experience and encounter with the God of the universe who has revealed himself in Christ.

The Christian God is a god of love and his followers do not curse unbelievers or spread death and violence upon other nations. Instead Christians trust in Christ alone and pray that he will turn hopelessness into hope, failure into success, sadness into happiness, war into peace, curses into blessings, captivity into freedom, hatred into kindness 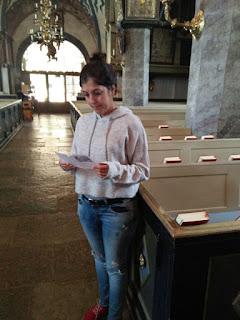 and darkness into light. Christians gather every Sunday in church and pray God’s blessings and peace upon every person in every nation of the world. We bless instead of curse.

Christians have a settled peace in their hearts from trusting in Christ alone who has fully paid for all of their sins, forgiving their guilt and shame. However, Muslims don’t have the same assurance that Christians have that their sins are forgiven. Instead they are relying on their perfect obedience in fasting, praying, and almsgiving to measure up to the standard Allah has prescribed for them. They struggle to perfect themselves through the principles of Islam by following the straight path and have no peace. Instead of having a love relationship as children of God, they view themselves as slaves of Allah who commands perfect obedience.

In Christianity, we all reach an inner peace and knowledge of God experimentally. However, followers of Islam are only supposed to obey Islamic rules and principles and they never get to know God; a Muslim will always stay a slave and is asked to bow down before God. While we Christian people are not slaves; we are all God’s children.

Muslims claim that Islam is a religion of peace but history tells a very different story. There have been centuries of violence and bloodshed where unbelievers are told to convert or die. In contrast, Jesus never conquered by the sword but instead invited his followers to come and find rest in him. “Come to me, you who are weary and carry heavy burdens, and I will give you rest,” (Matthew 11:28). There is a huge difference between the invitation to salvation as found in Christianity and “convert or die,” that is practiced in Islam.

If there is one verse in the Bible that perfectly sums up the major differences between Islam and Christianity, it is the most well-known and beloved verse that most ever Christian can recite by heart.

“For God so loved the world, that he gave his one and only son, that whosoever believes in him shall not perish, but have everlasting life.” (John 3:16)

God stepped out of heaven and came down to us giving us mercy instead of judgment. He didn’t come to bring a new religion, but instead he came to give us life and a new relationship. This is the greatest difference between Christianity and Islam.