"No matter if we die, we'll retake Iran."

This is the latest blog from my dear Iranian friend, Mehnoush, who is currently living as a refugee in Sweden awaiting an interview for residency. Mehnoush takes us behind this scenes to the uprising and bloody protests in Iran featuring the personal message from a courageous freedom fighter.

The voice of people's protest across the streets is the sign of a new movement towards freedom and being saved from a dark and vague future. People from almost every city have been gathering in the streets to put an end to a 40-year period of cruelty, corruption, capital punishment and war raising regime. You the incapable authorities of the Islamic government, you need to pack your stuff and face the end of these 40 years of dictatorship and cruelty.

Iranian people are not going to calm down until they make sure their land is filled with freedom, peace and stability. Their patience and resistance will soon result in the sweet tune of freedom. 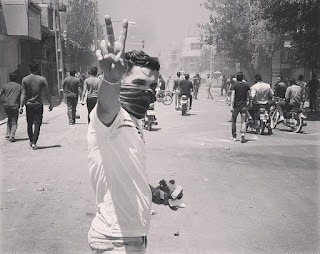 The evil 40-year period of Islamic government of mullahs has come to an end, a period overflowing with cruelty, corruption, murder and bloodshed. Throughout all history, Iran has never experienced a government more shameful than the one run by the mullahs. No one can imagine the number of the crimes committed or the youth being murdered or the girls and young women being raped by the agents of this regime or the families scattered away and wandering homelessly on the streets or in foreign lands during this horrifying dominion. There are numerous types of crimes committed by these vicious murderers. In the last 40 years, the only headlines and top stories have been about murder, death, capital punishment, war, suicide, embezzlement, poverty, unemployment and inflation.

Every single day, as soon we open our eyes, we face a dark and vague future before us. We only struggle to survive. Life means nothing to us. We only pass the time with an empty stomach and an exhausted body. The breaking news of men, women and even children committing suicide, embezzlement, unemployment, inflation, water and electricity outage in addition to the recent droughts have all made us lose our hope and spend our days and nights in sheer stress. We do not have the slightest human and social rights. We now only imagine reaching our wishes during our nightly dreams. We do not dare to think of the future as we barely see a future ahead. Only a day to night routine has been satisfying and enough for us. The voice of our protest on the streets with empty hands is heard well enough, but only our photos and videos are shared through the social media. I wonder when such black clouds are going to leave the sky of my city! I wonder if we can ever sense the smell of freedom and peacefulness. The only common hope followed by all Iranians these days is to get freedom, democracy and peacefulness back to the ancient land of Persia, a dream that can only come true when people are in unison. So, let's get out now and start to shout:

"No matter if we die, we'll retake Iran.”