In a historic election that could shift the balance of power in the middle east, Islamist Mohamed Morsy defeated former general Ahmed Shafik, by nearly 900,000 votes, becoming the new president of Egypt. Egypt has been a land of turmoil and violence since the overthrow of Hosni Mubarak last February. There have been riots, numerous deaths and standoffs between protesters and the military. Now finally, in the words of Morsy, "there is now a victory of the national will and a stepping stone toward national democracy." Really?
Morsy's victory at the polls transforms the social and political culture of Egypt from a moderate, secular state to an Islamic state ruled by Sharia law. There will be radical changes that will mandate new social regulations for both men and women under the rule of the Muslim brotherhood. Women will now most likely not be free to in choosing whether or not to wear their hijabs publicly. Sundays' election is a grim reminder of how radically a culture will change under Sharia law. In 1979 The rule of the Ayatollah's ousted the Shah and brought a fundamental change in the political and social structure of Iran. Freedom became a thing of the past. If you doubt this, feel free to ask my Iranian friends. They will tell you bluntly how drastically their lives have changed. Upon hearing of the results of the election, Iran congratulated Morsy on his victory and hailed the event as an "Islamic awakening."
An awakening? Really?
Since 1979 Iran has had quite an awakening. No freedom of the press, no freedom of religion, no freedom to protest and assemble, a mandatory public dress code and the list goes on and on.
I have a friend named Nada who lives in Cairo, Egypt. In a message to me after the results of the election, she lamented Morsy's victory saying, "It is so sad." Nada realizes that now her freedoms will be challenged under Sharia law.
If Islam is the final, true religion, than why are the rights and freedoms of individuals oppressed and disregarded? My friends in Iran have asked this same question over and over. Where is the love and compassion? Where is the freedom? 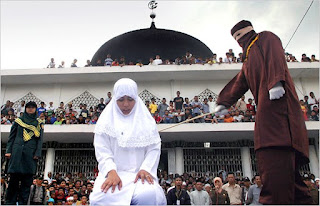 In contrast, there is real freedom and compassion in Christianity. From a social standpoint of view, William Wilberforce, a leading member of Parliament and a committed Christian, took up the cause of those in bondage and was instrumental in abolishing the British slave trade. He fought long and hard until the passage of the Slave trade act of 1807. Wilberforce is a prime example that there is true freedom and compassion in the hearts of those that are committed to Christ.
Christians are called to demonstrate love and compassion to everyone. Therefore we need to pray for President Morsy and people of Egypt to experience a "Christian awakening" where there is true freedom for everyone.
Posted by Randy L. Noble at 12:31 PM No comments: