Let's be the voice for tortured Iranian Prisoners!

Becoming a voice for tortured Iranian prisoners is the passion of Mehnoush's life.  In her latest blog, Mehnoush takes us behind the scenes into the dark and horrific torture chamber of Evin Prison.
Mehnoush is an Iranian refugee currently living in Sweden awaiting an interview to determine her residency. She is a human rights activist for her people living in Iran, the biggest prison in the world since 1979.

Unfortunately, during the last 38 years that the dictator Islamic regime has been ruling Iran, the vicious authorities have imposed any possible kind of harassment and torture on Iranian people, especially those who are imprisoned. Sometimes we get to hear the news of both physical and spiritual tortures of Iranian prisoners and sometimes don't. Now, let's be the voice of these captive people and let the rest of the world know about them, the people who get tortured, physically as well as spiritually,in the worst possible way ever!

One such significant torture is long-term solitary confinement during which darkness rules every corner and no light can penetrate into or no news from the outer world is heard. In this situation, the prisoner delves into the cell's darkness and undergoes silent breakdowns. In other circumstances, along with such spiritual tortures, the physical torture of other prisoners and their moans of pain gets silenced by the thick walls of the prison. There are heartless executioners who hang men and women prisoners from the ceiling, make them lie down on so-called "miracle beds" and torture them by whipping, electric shocks, heating men's penis by scorching skewers, ironing women's breasts and pulling finger or toenails off savagely. If one survives these beds and confesses to doing whatever she or he has not actually committed, he or she may rise up, but many people cannot tolerate the pressure and die very quickly.. These are some of the tortures applied to the prisoners.

Of the worst physical tortures one may mention is "rape". Several girls and young women are reported to have been raped by groups of jailors or objects like coke bottles. One of the most disastrous samples of such a dehumanizing torture is that of Taraneh Mousavi. They not only raped her in group, but burned her half-dead body to remove any possible evidence of their crime and buried it afterward. Moreover, it is sometimes reported that men prisoners are threatened to observe their wives and daughters being raped before their eyes if they refuse to confess. Hearing this could be regarded as the worst mental and spiritual torture for a man.
Most political prisoners sentenced to long imprisonments or capital punishment in Iran's prisons have finally obliged to confess by hearing just this single sentence and then said goodbye to their lives. One of these victims was the Kurdish political prisoner, Ramin Hossein Panahi who was severely wounded on his detention day and spent 200 days in  solitary confinement suffering the most horrible physical torture and is now about to face  the death penalty. 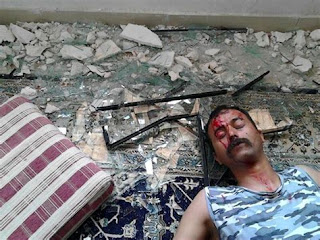 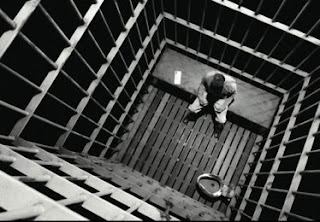 These are only few of the physical and spiritual tortures of Iran's horrendous prisons. So let's be the voice of all these defenseless prisoners
Posted by Randy L. Noble at 2:00 PM 1 comment: