A Tale of Two Courageous Women

"You gain strength, courage and confidence by every experience in which
you really stop to look fear in the face. You are able to say to yourself,
"I have lived through this horror. I can take the next thing that comes along."
You must do the thing you think you cannot do."
Eleanor Roosevelt

As I draw near to finishing my new book, "The Rose of Nowruz: dreams of hope and freedom," a book dedicated to My Iranian friends, my attention is temporarily distracted by the incredible courage of two amazing women, 14 year-old Malala Yousufzai and 49 year-old Nasrin Sotoudeh.
The world was stunned and outraged by the senseless shooting of a young Pakistani woman by the Taliban. Fourteen year old Malala Yousufzai was shot in the head for standing up and speaking out for the right of every young woman in Pakistan to receive an education. Left for dead by the Taliban Malala was airlifted to a hospital in Birmingham, England where she received emergency surgery to save her life. Doctors are encouraged by her ability now to stand up on her feet and have sufficient memory recall inspite of her life-threatening injuries. 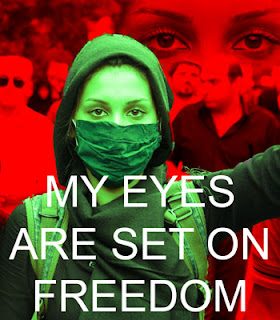 Forty nine year-old Nasrin Sotoudeh, a human rights attorney in Tehran, Iran began a hunger strike on October 17, 2012 in Evin Prison, protesting the unjust restrictions put on her family visits.Prison authorities have forbidden her to hug her daughter and husband during visits and are denying them the right to leave the country.  In 2010, The Iranian government convicted Nasrin of acting against national security and spreading propaganda, sentencing her to more than 6 years in prison. Nasrin spent her professional career defending the rights of activists and dissidents and speaking out against unjust executions.
This is a tale of two extraordinary courageous women who fearlessly stand up against the establishment and risk their lives for the cause of freedom. The selfless and courageous acts of these freedom fighters are very similar to the story-line of my new book, "The Rose of Nowruz." In a male dominated society where women are scorned and discriminated against, Malala and Nasrin are two "shining stars,"  lights in the darkness of fear and oppression. They have looked fear and death in the face and have put their lives on the line for the rights and freedom of women everywhere.
Women in the Islamic world are crying out and standing up, refusing to be treated with contempt and cruelty. They are tired of senseless laws and restrictions which serve to reduce them to mere possessions and slaves.
I am in awe of the courage and convictions of both Malala and Nasrin. They are the reason I will stop at nothing to get my new book into the hands of women's rights and human rights organizations all over the world. My friend Atefe, who lives in Tehran has challenged me to be her voice. She recently told me  in a chat that she hopes, "God causes my book to be famous so that every reader will hear the cries of every woman in Iran."
I am humbled by Atefe's challenge. I intend to be her voice and further the cause of Nasrin and Malala.
I pray that the Taliban Gunmen are soon caught and punished. I think a fitting punishment for them would be to have to sit in a locked room with Malala for 48 hours and listen to her preach about the dignity and rights of women.