The First declaration of Human Rights

Iranians love the study of Persian History. They long to return to the glory days before the invasion of Arabs in the seventh century and the domination of Islam. One of the heroes of the glory days was Apranik, a courageous female commander of the Persian Army who bravely fought against the Arabs. This was the glory days where women were treated as equals and given true dignity and respect. One of the best known examples of "the glory days" is the artifact known as the Cyrus Cylinder. The Cyrus Cylinder is a scroll like cylinder with a famous inscription written on it by the hand of Cyrus the Great. Cyrus the great was king of Babylon in the sixth century who ruled over his subjects with fairness and decency. Inscribed on the famous cylinder by Cyrus are the foundational principles of justice, liberty and freedom. It is regarded as the "first declaration of human rights." Cyrus believed in ruling with these principles and granted freedom of opinion and basic human rights to his subjects. The heritage of Cyrus was a heritage of human understanding, tolerance, compassion and freedom.
In the pre-Iranian government of 1979, The Shah of Iran declared that the cylinder was indeed the first charter of human rights. A replica of the cylinder is housed on the second floor of the United Nations building in New York.
Iranian President Ahmadinejad could learn some valuable lessons from this famous artifact. Before the domination of Islam, Iran enjoyed a heritage of real freedom and tolerance. The Iranian government no longer reflects this heritage. They have replaced freedom and tolerance with bondage and tyranny. The freedom to think and believe is non-existent. Every journalist, blogger, protester and politician is threatened with either death or imprisonment if they dare disagree with government policy. 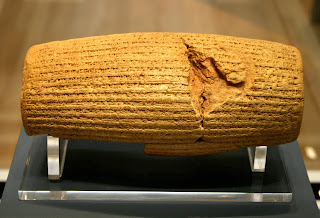 The Cyrus Cylinder stands as a rebuke to the present government of Iran and also a reminder of the way God intended his people to be treated. Our human rights come directly as a gift from God. The Declaration of Independence, another ancient artifact, echoes the same theme as the cylinder that "all men are created equal and are endowed by their creator with certain unalienable rights, among these, life, liberty and the pursuit of happiness."
Long ago, during the glory days of ancient Persia, Cyrus got it right! He left mankind with an artifact that should be the foundational guide of every government.
The Iranian government should not ignore their own history. They do so at their own peril!
Posted by Randy L. Noble at 7:37 PM 1 comment: