"Jesus and the Samaritan woman."

During his earthly ministry, Jesus went against the accepted social norms of his day and reached out with respect toward women, speaking publicly with them, healing them, and showing compassion. Jesus is the perfect standard for us to follow in how we ought to treat women. This short article is adapted from my new book, "Broken yet beautiful: Rising up from their ashes."
My book is available in kindle and paperback on Amazon.com 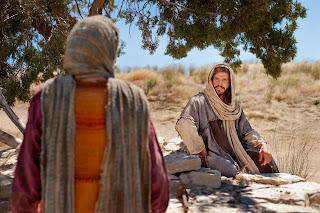 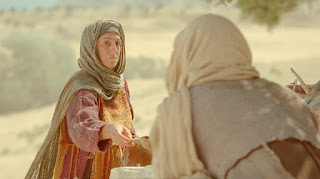 John 4:3-4
“He left Judea and departed again for Galilee. And he had to pass through Samaria.”

“And he had to pass through Samaria,” This is very important to understand. Jesus deliberately chose this route. He was a man on a mission to break down the hostile and divisive walls of racism that had existed for centuries between the Jews and the Samaritans. The Samaritans were despised and hated by the Jews. During the Babylonian captivity when pagans had entered the land and mingled with the Jews, the result was a deadly mixed race. The Hebrews of the Northern Kingdom and the Assyrian settlers had intermarried poisoning the pure race during of the captivity in 722 b.c. The worship of Yahweh had been corrupted by heathen practice, creating a major rift between the Jews and Samaritans. The Samaritans had offered to rebuild the temple and were refused by the Jewish people, so as a result they had built their own temple on Mount Gerazim in protest. The Jewish people were known to say, “May I never set my eyes on a Samaritan!”

However, Jesus had deliberately chosen the route that took him through Samaria so that he could break down the divisive barriers of racism and bring hope and healing to the hardened hearts that had been corrupted by sin for so many centuries!

Weary from his long journey, Jesus decided to relax sitting next to Jacob’s well, located in the Samaritan town of Sychar. Just as Jesus had sat down, a young Samaritan woman arrived with her bucket to draw water from the well. This woman specifically chose the same time every day to draw water from the well knowing that she would be alone. Her reputation among the other village women had been tarnished because she was living with man out of wedlock. In order to avoid the stigma of confrontation, the Samaritan woman secretly came alone. However, today she was not alone.

As soon as the woman arrived at the well, Jesus startled her with an unusual request.

The fact that Jesus was talking to a woman and not just any woman, but a woman from the despised and half-breed Jewish race, was shocking to her.

“How is it that you, a Jew, ask for a drink from me, a woman of Samaria? (For Jews have no dealings with Samaritans) Jesus in talking to the Samaritan woman, broke through two barriers, one steeped in bigotry and the other in gender discrimination. When the Pharisees saw a woman approaching, they would close their eyes and as a result were always constantly running into things. Thus, they were nicknamed, “Bleeding and bruised Pharisees.”

However, as we have seen so far, Jesus deliberately chose to go against the accepted racial norms of the day and broke with the accepted precepts of gender abuse. Jesus had traveled a long distance to keep a divine appointment with a woman who had been shunned by her female peers and ostracized by the Jewish race.

“If you knew the gift of God, and who it is that is saying to you, “Give me a drink,” you would have asked him and he would have given you living water.”

Jesus reaches out in compassion to this shunned woman and invites her to drink of the water that will go beyond just quenching her thirst, but instead will fill her soul with refreshment and healing. Yet this woman does not yet grasp what Jesus is exactly saying.

“Where do you get that living water? Are you greater than our father Jacob?”

Jesus immediately corrects her perception and gently guides her into the spiritual truth that he is offering her.

The words of Jesus had penetrated the anxious soul of this woman and gave her a craving for what he was offering.

“Sir, give me this water, so that I will not be thirsty or have to come here to drink water.”

Before Jesus graciously gives her the living water, she must first be gently prodded by the convicting grace of a Holy God who knows everything about us. Jesus in respect and politeness points out the prevailing sin in her life that she needs to recognize before experiencing the refreshing taste of living water.

Jesus said to her, “Go call your husband, and come here.”

The Samaritan woman is astonished and recognizes Jesus as a prophet. However, she skillfully tries to avoid her sin by turning the conversation toward the subject of correct worship. The woman points out that she knows when the Messiah comes he will reveal all things to them. Jesus looks her intently in the eyes and proclaims, “I who speak to you am he!”

Dropping her water jar in shock and amazement, the Samaritan woman rushes back into town announcing in jubilation that she has found the Messiah. As a result, many believed her testimony.

This is a beautiful and profound story of God’s grace toward women. The Samaritan woman was one of the first persons that Jesus revealed his Messianic identity to. She had come to the well on an ordinary day and left transformed by the true living water that had cleansed her from all of her guilt and shame. She also became a passionate evangelist, commissioned by the Son of God, to take the message of living water to her village. The first evangelist was a woman who had the reputation of being a harlot and now was heralded as a beautiful bearer of good news!

Christian author and Apologist, Ravi Zacharias has a powerful commentary on this beautiful story in John’s gospel:

“The Samaritan woman grasped what he said with fervor that came from an awareness of her real need. The transaction was fascinating. She had come with a bucket. He sent he back with a spring of living water. She had come as a reject. He sent her back being accepted by God himself. She came wounded. He sent her back whole. She came laden with questions. He sent her back as a source for answers. She came living a life of quiet desperation. She ran back overflowing with hope. The disciples missed it all. It was lunchtime for them!”
Posted by Randy L. Noble at 12:41 PM No comments:


While it is true that Saudi women have been finally given the right to drive, yet the most oppressive law still remains on the books against them. The Male Guardianship Law still keeps Saudi women in chains and while there seems to be a movement for reform in the kingdom, the movement needs to seriously address this most oppressive law! The following article is adapted from my new book, "Broken yet beautiful: Rising up from their ashes."   My book is listed on Amazon.com 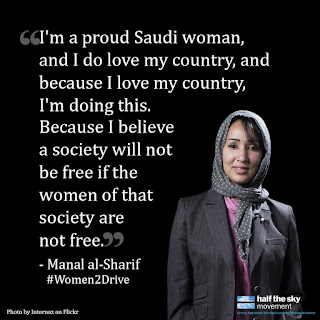 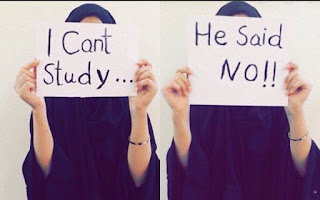 On Sunday June 24, 2018, the world witnessed an historic milestone take place in the kingdom of Saudi Arabia. After decades of protests, the driving ban against women was finally lifted and for the first time now, women can legally be issued driver’s licenses and sit proudly behind the wheel of a car without going to jail again. While this is a major, historic accomplishment in a nation hostile to the rights of women, still it is a very long road ahead for women to finally experience true freedom. Most every Saudi woman will tell you that until the Male Guardianship Law is finally repealed, they will still be under the domination of a man.

Before explaining the restrictions on women because of the Male Guardianship law, I want to first educate you on a little of the history of Saudi Arabia and a form of Islam known as Wahhabism. Wahhabism was born through a radical 18th century Muslim reform movement. The purification of Islam took place through the efforts of Muhammad ibn al-Wahabband and was formally adopted by the Saudi Family in 1744.

Members of Wahhabism call themselves Unitarians with a strong emphasis on the absolute oneness of God (Tawhid). They reject the practice of visiting tombs, venerating saints, advocating a return to the original teachings of Islam incorporated in both the Quran and Hadith. They also stress a literal belief in the Quran and the establishment of a Muslim State basely sole on Sharia Law.

The Wahhabis occupied Mecca and Medina at the end of the 18th century, bringing everything under their control. The Kingdom of Saudi Arabia was created in 1932, assuring the religious and political dominance of Wahhabism. Many of the sites associated with the early history of Islam, (homes, graves or companions of Muhammed) were demolished in order to purify the holy religion.

Both Britain and the United States subsidized Saudi Arabia in 1945 right after World war II and enabled them to join the United Nations. While the driving ban has been lifted, more than likely for economic reason rather than women’s rights, there is still a great chasm for females to cross until they have obtained equal rights. The rules for the Male guardianship Law still prohibits so much of women’s freedoms despite a few glimpses of hope on the horizon.

In 2015, women were able to cast ballots for the first time during municipal elections but couldn’t speak to male voters or couldn’t have men and women mixing in their campaign offices. The late King Abdullah issued a decree in 2011 that gave women the vote and two years later, ordered 20% of seats in consultative council to be set aside for women.

In April of 2017, The United Nations elected officials from Saudi Arabia to sit on a commission for women’s rights. This is insulting to the women of Saudi Arabia who are constantly living under the oppressive dictatorship of men. It is absurd that a group of men sit on a panel that supposedly promotes women’s rights, shaping global standards on gender equality and empowerment of women.
UN watch director, Hillel Neuer rightly points out,
“Every Saudi woman must have a male guardian who makes all critical decisions on her behalf, controlling a woman’s life from birth to death. Electing Saudi Arabia to protect women’s rights is like electing an arsonist to become the town fire chief!”  The panel will serve a four-year term from April 24, 2017 until April 2021.