I am more than what I wear

I came across a beautiful poem on the internet written by Samantha Higgins that captures the essence of the truth that we are more than what we wear. Samantha writes:
"Please don't judge me by my face. By my religion or by my race.
Please don't laugh at what I wear or how I look or do my hair.
Please look a little deeper way down deep inside and although you may not see it.
I have a lot to hide.
Behind my clothes the secret lies. Behind my smile I softly cry.
Please look a little deeper and maybe you will see. The lonely little girl that lives inside me."

Samantha beautifully captures a sacred truth! There is much more to us than the clothes that we wear. It is sad temptation to categorize and judge people by their clothing. Yet this is exactly what the morality police of Iran do to their citizens.
The Gasht Ershad, the title they are commonly known by, patrol the streets of Tehran to ensure men and women are conforming to the Islamic dress code. Women must be appropriately dressed, covered from head to toe and not flashing too much skin. If their headscarves are improperly worn they will be stopped by the Police and fined or arrested. Men are prohibited from wearing necklaces and their hair length must be kept short. Conforming to the Islamic dress code is a "money-maker" for the Police. For example, women wearing sunglasses above their headscarves are fined $15.00. Its $5.00 per finger if a woman is caught wearing nail polish and the list goes on and on.
If a woman is arrested, she is detained at police headquarters until relatives can come and bail her out. She is then sent home with the mandate that next time she will conform to the law by wearing more modest clothing.
President Ahmadinejad warned the citizens of Iran in a speech that an earthquake is certain to hit the capital city because of the way in which women dress.
It is both frightening and sad for a President to use fear and manipulation against the people that he was elected to serve.
In the Bible, the Lord sent Samuel to anoint the next king of Israel. Samuel spotted Eliab and cried out, "Surely this is the Lord's anointed." 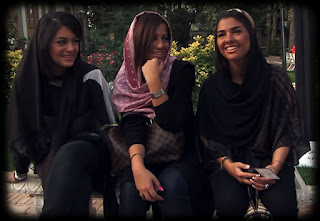 However the Lord responded to Samuel and said, "Don't judge by his appearance or height, for I have rejected him. The Lord doesn't see things the way you see them. People judge by the outward appearance, but the Lord looks at the heart. (1 Samuel 16:7)
This is an important principle that the government of Iran needs to abide by. Any religion that reduces a person's worth to what they wear is both evil and judgmental. God sees what we don't see! He looks much deeper. He sees a person of beauty and worth made in His image.

The poem by Samantha Higgins sums it up beautifully, "Behind my clothes the secret lies..."
The Morality police of Tehran are not looking deep enough. They are prisoners of their own religion and their religion is destroying the worth and value of human beings.
Posted by Randy L. Noble at 9:57 AM No comments: