The holocaust: " a picture is worth a thousand words."

"The holocaust is a myth," proclaims Iranian President Ahmadinejad."
This is a bold statement to make in a world saturated with hatred and racism. The question is, is that an accurate statement? Does the claim correspond to the facts of history? First of all, what does the word "myth" mean anyway? The dictionary defines the word myth as, quote, "a fictitious story, person or thing."
So the question becomes, is the holocaust really a myth that is denied by the facts of history?
When the allied and Russian troops marched into the death camps of Auschwitz and Treblinka, was it a myth when they discovered thousands of dead and deformed bodies lying on top of each other in gruesome piles? Are you seeing a myth when you take a tour of the holocaust museum in Washington d.c. and are confronted with the thousands of pictures and documents graphically revealing what life was like in the death camps?
Can you honestly proclaim that the holocaust was a myth when you hear the heart-wrenching testimonies of the survivors whose lives have been scarred forever?
The holocaust is anything but a myth! It was a devastating reality of evil, hatred and intolerance that brutally claimed the lives of more than six million Jews. 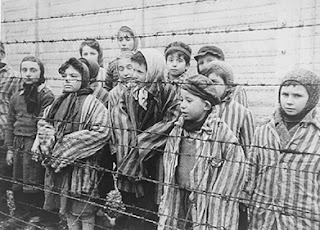 In my new book, "The Promise: We will meet again," I take the reader on a journey with Hannah and Rachel, two young Jewish girls whose incredible friendship was put to the test by the darkness and the horrors of the holocaust. In the end, The Love of God triumphed over the hatred and cruelty of the Third Reich.
The Old cliche, "a picture is worth a thousand words," I think will demonstrate that the statement, "The holocaust is a myth," has no basis in reality or history. Please take a few minutes to watch this short video and I think you will agree that a picture is indeed worth a thousand words.
Posted by Randy L. Noble at 11:37 PM No comments: