A loss of shame and guilt

"Therefore the showers have been withheld and no spring rains have fallen.
You have the brazen look of a prostitute. You refuse to blush with shame."
( Jeremiah 3:3)


Twenty years ago, when famed Actor-Director, Woody Allen, was accused of having an affair with the adopted daughter of his ex lover, Mia Farrow, he staunchly defended his actions by saying that he hadn't crossed the line. Allen denied that his affair was incestuous and explained that Soon-Yi Farrow had asked him to take nude photographs of her.
The example of Woody Allen should result in a cultural outrage by the public, but instead it is carefully explained away by Woody Allen and a liberal media that excuses and justifies indecent behavior under the claim of, "it's none of your business. It's my life!"
Sin has a numbing effect. When sin is denied and left un-confessed, the conscience is seared and there is a loss of shame and guilt. That is the problem with our culture. We have created a "god" in our own image to justify our sin and because of that, we have ignored His holy standards, resulting in a loss of shame and guilt.
Unfortunately, there is another outrageous example making news headlines. Just recently, the Islamic republic of Iran passed a law allowing stepfathers the legal right to marry their adopted 13 year-old daughters. The Iranian parliament passed a bill to protect the rights of children and instead opened up the door for incest and pedophilia. Under this new law, the "caretaker" can marry his adopted daughter if the court ruled that it would be in the best interests of the child. According to statistics, some 42,00 children between the ages of 10 and 14 were married in Iran in 2010.
While the Guardian Council has the final say on the implementation of this new law, it should be noted that in passing this bill, the Iranian parliament is in essence justifying incest. The young children of Iran are not being allowed to grow up and mature normally. Their childhood is being stolen away for the sexual gratification of older men!
While most Muslims will deny that is consistent with Islamic practice, yet all one has to do is examine their history.  One of the wives of Muhammad, the prophet of Islam, was six year-old Aisha. Aisha was the daughter of Abu Bakr, the first Caliph to succeed Muhammad after his death. Historical sources say that Aisha was only 9 years old when Muhammad finally consummated their marriage.
The history of Islam seems to play a major role in the justification of the new child marriage law in Iran.
This new law if implemented by the guardian council of Iran would pave the way for rape and child abuse. Young children would no longer be allowed to grow up normally but could potentially be victimized for the rest of their lives with the painful scars of sexual abuse.
When we ignore the "warning sirens" of our conscience, screaming at us to stop and not do that, we slowly become numb to the shameful acts we are engaged in. When a pilot is flying his plane too low, there is a warning siren that goes off in the cockpit, urging him to pull up! If the pilot ignores that warning, the plane is certain to crash and everyone will perish.
In the same way, when we ignore the warnings of God's Word, we too will perish.
God declared to his people, "You refuse to blush with shame."
Our only hope is repentance. The only remedy to keep the plane from crashing is to obey the warning sirens and pull up!
My prayer is that Iran will understand the horrible consequences of implementing this new bill and instead recognize what it will do to thousands of innocent children.
Please go to my Facebook page and sign the petition and speak out for these innocent children!
Let's together put an end to this shameful act and save the childhood of these beautiful young ladies! 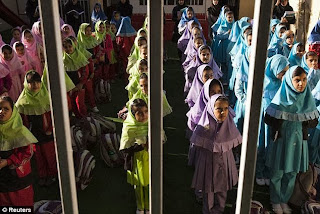