"Let's be the voice for Iranian refugees!"

This is the latest blog from my dear Iranian friend, Mehnoush. Mehnoush understands and feels the pains of refugees,because she herself is one who is currently residing in Sweden waiting for a very important interview to determine her residency. In her new blog, Mehnoush takes you behind the scenes of the lives of refugees and "puts a face on them," telling their painful stories of escaping from Iran to find refuge in another country where there is hope for freedom and a new life.


The highest number of refugees belongs to the countries in which obligatory Islam, absolute poverty, dictatorship and war are easily recognized. A refugee is the oppressed voice of a person who has left his/her own land for the very elementary human rights including freedom and independence. In recent years, a remarkable number of Middle Eastern refugees, especially from Iran, have been obliged to leave their lands.

In Iran, they determine your name, nationality and religion five minutes after your birth and that’s why you spend the rest of your life defending the things you have not chosen yourself. Spiritual and mental pressure, lack of freedom of press and expression in addition to the suppression of human character and values is day to day life in Islamic Iran; therefore, the only option left to everyone is leaving motherland and seeking refuge from a supportive country. It is noteworthy that women and girls have undergone the highest amount of mental and spiritual suppression and harm in Iran in terms of arranged marriages, compulsory Hijab, rape and freedom suppression.

There are many Iranian refugees found in Sweden, especially young women and girls who mostly speak out their deep grief. Some days ago, an Iranian woman shared with me her own painful story. She was forced to marry an old man and suffer unbelievable pains in terms of her sexual relationship, pregnancy and child birth. She told me that her husband regarded her as the servant of the house and the slave of his bed. After giving birth to three girls  and being forced to live with them in a village, she finally decided to escape and reach Sweden through the mountains and the sea with hundreds of difficulties to seek refuge.

Also, there was another Iranian woman refugee who told me her husband beat her so badly that when she got to Sweden, she was suffering from broken ribs, teeth and hands. She told me if she hadn’t escaped to Sweden, that she would have committed suicide in Iran. 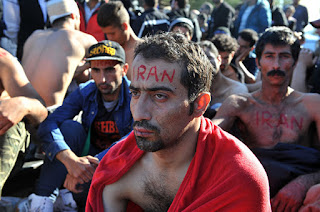 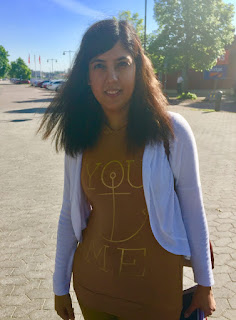 Another girl told me about the suppression of her religious views and that she was dismissed from university due to her Bahá'í Faith and the regime threatened her with imprisonment for writing a letter of complaint.

Yes, these are the lamentations of some of the battered Iranian girls and women who have been oppressed by both the Islamic government and traditional cruel families. Please join me in being the voice of the suffering refugees who have no alternative left but to flee their homeland for a country that will give them safety and freedom.
Posted by Randy L. Noble at 11:08 AM No comments: