The God of Irresistible Love

"And while he was still a long way off, his father saw him coming. Filled with love and compassion, he ran to his son, embraced him and kissed him."
The parable of the prodigal son"
(Luke 15:20)

A constant theme that runs through out the pages of Scripture is the theme about God's irresistible love. The Bible portrays God as a God of immeasurable love and compassion for his children. Even when his children fall into idolatrous practices and chase after other false gods, God pursues them with his irresistible love. Though his heart is grieved, God never stops loving his children even when they abuse the love that he freely lavishes upon them.
A perfect example of this irresistible love is found in the parable that Jesus told about the prodigal son. Jesus was a master storyteller about the love and compassion of His heavenly Father. One day his disciples and the religious leaders gathered around him as he began to tell his most famous and favorite parable.
Jesus told the story about a Father who had two sons. One day his younger son demanded his share of his inheritance now. So the father divided up his wealth between the two sons. The younger son quickly departed for another country and wasted all of his inheritance on wild and promiscuous living.
Desperate for money, the younger son agreed to take a job feeding pigs. There was a famine at that time in the land and the son was so hungry that even the pigs pods looked appetizing to him.
One day the son came to his senses and decided to return home. He would beg for his father's mercy and be satisfied to just become a hired servant. While He was on his way home, His father saw him a far off in the distance. At this point in the parable, Jesus emphasized how the Father reacted to seeing his son. Instead of being angry and bitter over what his son had done, The father was instead filled with love and compassion and ran to his son, embracing and kissing him. The Father welcomed the son in his arms of forgiveness and rejoiced that he was returning home. "We must celebrate with a feast, " The Father proclaimed, "For this son of mine was dead and has now returned to life. He was lost and now he is found."
After listening to this powerful story of love and forgiveness, the religious leaders were appalled and offended. Their concept of God was one of anger and punishment and certainly not grace and forgiveness.
This parable perfectly illustrates the God that Jesus frequently spoke about. He is heavenly father that never stops loving his wayward and sinning children. He is a God of irresistible love that will pursue us to the end of the earth and win back our hearts and affections for him.
What is your concept of God ? Do you carry a heavy burden of guilt and shame? 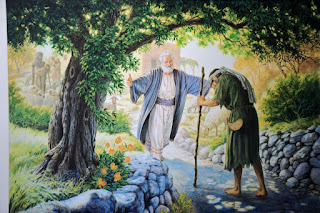 Jesus spoke this parable for a person just like you. Instead of being tormented by guilt, cry out to God today and just like in the parable, He will run toward you and embrace you in his arms of mercy and compassion.
Posted by Randy L. Noble at 8:27 AM No comments: