The Promise: We will meet again 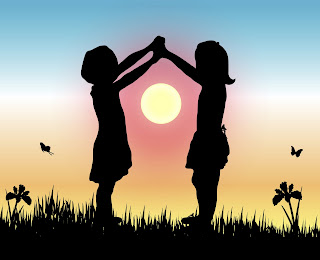 During vacation, The idea for my fourth book came to me. The diary of Anne Frank has had a major impact on my thinking and writing. Growing up as a young teenager, I read the diary and watched the movie and was moved to tears and compassion for Anne and her family when they were finally discovered by the Germans and subsequently carted away to the death camps. In my first two books, "Beyond the Veil," and  "Shining Star" Nadia keeps a journal of her key life events very similar to that of Anne Frank.
Because I have been so influenced by the diary of Anne Frank and the horrors of the Holocaust, the idea of writing on this subject flashed upon my mind while I was lying on the beach at the Gulf Shores of Alabama. The story is about two young Jewish girls named Hannah and Rachel. They are the best of friends. The story opens in Krakow, Poland in 1939. They are attending a Jewish wedding and enjoying the festivities when suddenly the German Invasion of Poland begins. Fast forward two years later. Both Hannah and Rachel are at school and notice their classmates are quickly disappearing. One by one, their friends are being called up and ordered to report to the train stations where they are separated and hauled away to the labor and death camps. In desperation and fear, Hannah and Rachel make a solemn vow to each other, a promise, that if they are captured, that after the war they will meet again.
Through a series of circumstances, Hannah is captured by the Germans but manages to escape and is taken in by a Christian family to hide her from the Nazis. Eventually Hannah ends up in Auschwitz, the infamous death camp. Through some friends she learns the whereabouts of Rachel.
Miraculously, both Hannah and Rachel meet again after the liberation of the camps and have incredible stories to tell each other.
I cannot wait to begin writing this story. The images of the holocaust and the horrible discrimination against the Jewish people has motivated me to compose a story of an enduring friendship against the backdrop of evil and suffering. I am writing this story to remind us to learn from the horrors of History and to demonstrate how love and friendship ultimately conquers the worst of evils. The name of the book will be, "The Promise: We will meet again." I encourage you to go to my profile page and click on the link that will give you the virtual 3d tour of the secret annex, the hiding place of Anne Frank and her family. Amidst the hatred and discrimination by the Nazis, you will discover how love and courage ultimately triumphed over evil. The diary of Anne Frank has sold millions of copies and has been published in several languages all over the world. If you have never read her story, please make this your summer reading. It is my prayer that my upcoming book will also demonstrate that love and friendship overcomes the evils of hatred and discrimination and makes the world a better place to live in.
Posted by Randy L. Noble at 7:52 AM No comments: