"Women freedom fighters of the past and present"


Return with me to the glorious days of the Persian Empire before the onslaught and domination of Islam. 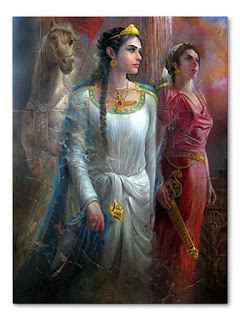 The Women freedom fighters of Iran during the Sassanian dynasty had important positions in society. Often they were involved in the government and military,fighting off the furious invading Islamic/Arab armies in the sixth century.
This was a glorious time when women were not treated as second-class citizens. When Islam conquered the Persian empire, precious freedoms were destroyed! Freedom of speech, freedom of religion and equal rights. Women became the slaves of men and instead of being courageous leaders, they were reduced to possessions and properties of a male-dominated society.
Before the Islamic conquest, one great example of a woman freedom fighter who bravely led her nation was Apranik.
Apranik rose up in rank and became the commander of the Persian Army in the sixth century. Riding her famous white horse of freedom, Apranik courageously fought to the death against the invading Arab oppressors. Apranik lived during the Sassanian dynasty of Persia. The ancient Greek and Roman empires were both horrified and fascinated by the mighty ruling women of Persia.
You may wonder why its important to understand this golden ear of Persian history. If Iran is to return to its "glory days" they need to understand where they came from. At one time, Women were not treated as "second class citizens in Iran (Persia) but had the highest rank in society and the highest respect among men.
When I think of modern day freedom fighters in Iran like Bahareh Hedayat, Nasrin Sotoudeh and Shabnam Madadzadeh, who are suffering for their cause in prison, I realize that women are not giving up on returning to their "glory days!" These women remember their history. They still care about freedom and are willing to speak out and suffer with the hope of a free Iran one day. These are the women, who like their historical predecessors, have the courage and conviction to fight for their nation.
In just a few months, my new book, "The Rose of Nowruz" will tell the story of Bahareh, a concert violinist in Tehran, who risked her life and her family for rights of women in Iran.
The women freedom fighters are here to stay. They are not going away. Their spirits are still with us today!