The tragic life and death of Zeinab.


In her latest blog, Mehnoush tells the tragic story of a young child bride who was accused of murdering her abusive husband in order to stay alive and after many years in prison was executed by the evil Iranian regime.
Zeinab joins a long list of victimized women in Iran who are unjustly executed by a misogynistic culture.


Once again, another case of a woman and another crime against her committed by the shameless and misogynist system of Islamic Republic of Iran!

Zainab Sekaanvand was a teenage girl whose family forced her to marry at the young age of 15. She suffered for a long time being beaten and tortured by her abusive husband. Through several letters from prison, she had already explained everything about her dark and shameful life; also, she had claimed to have been raped several times by her brother-in-law.

When she was only a teenager, Zainab may have been compelled to commit a crime which could be considered a kind of self-defense against threat, rape, harassment, cursing and torture, while Islamic system calls it murder. Like so many other innocent women, Zeinab was compelled to confess to a murder that she later denied committing after finally being represented by a lawyer. Despite her denial, the Judge refused to investigate her claim and instead sentenced her to death. The judge on duty did not pay any attention at all to the way she had been harassed and tortured and only emphasized the need for capital punishment. In a letter to Human Rights Organization, Zeinab had already mentioned that she was frequently tortured and hit by her male investigators who had made her sign some phony documents. She was also raped by one investigator during the investigation process; afterwards, she got pregnant and gave birth to a still born child.

However, the prison authorities claimed she had already gotten married to one of the prisoners and then became pregnant! No one can possibly believe such a big lie! In fact, this suppressed young girl is a typical example of thousands of Iranian girls and women who are regularly harassed and oppressed by the judicial and legal system of the country and then executed as innocent victims. None of these girls and women are allowed to complain or live a normal life under the control of the Islamic government and they are simply regarded as sexual slaves of men’s lusts. This is the only value of a girl or a woman in Islamic ideology as well as in Islamic lands.

In the end, Zainab was cruelly executed on October 2, 2018 and her name joined the memories of a long list of female victims. 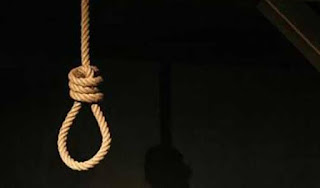 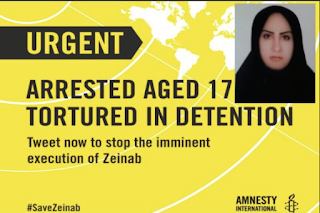 Now you may now rest in peace, you have finally been freed from the cruelty that you faced throughout your short 24-year-old life. Now is the time to prepare and restore your lost rights in the righteous and just presence of Almighty; the day all your torturers and executioners are going to be punished for good!
Posted by Randy L. Noble at 3:32 PM No comments: