"Will you cast the first stone?"

"Jesus declared, "Let the one who has never sinned throw the first stone!" (John Chapter 8, verse 7)


Can you imagine for one moment a woman dying under a rain of stones while buried in the ground up to her breasts? What thoughts went through her mind during the last moments of her life? What could possibly justify the application of such a cruel and barbaric form of punishment to a woman? 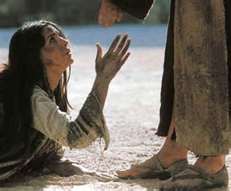 Iran's Islamic penal code allows for a woman to be stoned if she is found guilty of adultery. Just last year, Sakineh Mohammadi Ashtiani, a 43-year old Iranian woman was sentenced to be stoned until an international outcry prevented the execution from being carried out.
In the Bible, there is a powerful scene where the religious leaders bring to Jesus a woman caught in the act of adultery.Instead of being zealous to uphold the law of God, they use the woman to try and discredit the ministry of Jesus and expose him as a false prophet.
"Teacher this woman was caught in the act of adultery. The law of Moses says to stone her. What do you say?'
The scribes and Pharisees are convinced they have cornered Jesus and he has no way out! If Jesus agrees to stone the adulterous woman, then his reputation of being compassionate and a friend of sinners will be called into question. If, however, Jesus says to spare her, then He is contradicting the Law of Moses and will be exposed as a false prophet. What Does Jesus do?
In what can be best described as an incredible display of compassion and wisdom, Jesus kneels down and writes in the dust with his finger. Then he gazes intently into their eyes with a masterful answer. "Let the one who has never sinned throw the first stone!"
I can picture the utter shock and conviction on the faces of the religious leaders. They never expected an answer like that. Jesus has pointed his finger at the greater sin in this situation. The hypocrisy of the religious leaders! They weren't  interested in upholding  the law of God but rather using the sin of a woman to further their crusade of lies and deceit. The statement of Jesus silenced their accusations. One by one they dropped their stones and departed.
Was Jesus being soft on the Law of God? Absolutely not! He turns to the woman and asks, "Where are your accusers? Does no one accuse you?" The woman answers meekly, "No Lord." Jesus looks with compassion in her eyes and says, "Neither do I. Go and sin no more."
This story in the Gospel of John beautifully illustrates the mercy and Grace of Jesus. He affirms that she has broken God's law. Yet instead of agreeing to the execution, Jesus covers her sin with His mercy and compassion. This is precisely what Jesus did for us at the cross. He willingly took the wrath of God in our place so that we could be spared and forgiven.
I believe Jesus would utter the same words to the leaders of Iran. He would not tolerate the unjust and cruel punishment and discrimination of women. He would expose their religious hypocrisy. There is only one who is sinless and has the right to cast the first stone and that is of course Jesus.
The next time you and I are tempted to pronounce judgment,  we need to pause and remember the words of Jesus. "Let the one who has never sinned throw the first stone."
Like Jesus, our response should be one of mercy. Mercy triumphs over judgment.
Posted by Randy L. Noble at 8:48 AM 2 comments: