On December 5, 2012, a faulty heater exploded in the Shin Abad elementary school in the tiny village of Piranshahr and severely burned over 40 students.
Quick to cover up their incompetence, the Mullah's intelligence agents warned families to not conduct interviews with news agencies. It is a well known fact that many of the elementary schools in Iran have worn-out heaters that desperately need to be replaced. A few days later after the tragedy, two of the young students died as a result of their severe burns.
Pictured here is ten-year old Yeganeh recovering from her burns in a local hospital  When the  Mullah saw her picture, he publicly complained that she was not wearing her hijab.
Religious rituals and traditions are destructive and deceptive!! The disease of being blinded by religion is a disease that can effect all of us. God desires mercy and compassion and instead many religious leaders fall prey to a system of rules and regulations that devalues and destroys human beings.
During his earthly ministry, Jesus encountered the blindness of religious traditions many times when he met with the Pharisees and scribes. On one occasion, the Pharisees complained to Jesus that his disciples were not following the prescribed Jewish hand washing tradition before eating.
Jesus immediately rebuked the blindness of the pharisees and accused them of replacing the law of God with their man-made traditions. The Pharisee were obsessed with outward religious purity while ignoring the real problem, the sinfulness of their hearts. 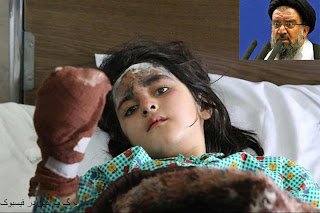 Jesus pointed out their dilemma that they were busy honoring God with their lips while their hearts were far away from him. "The real problem," Jesus emphasized was the condition of the human heart. "It's not what goes into your body that defiles you, "Jesus proclaimed, " you are defiled by what comes out of your heart."
The point Jesus was making was that their religious traditions had blinded them to the real problem and had corrupted the true intent of God's law.
Sadly, the Mullah in Iran is much like the Pharisees that Jesus rebuked because of their religious traditions. Instead of showing mercy and compassion for the young burn victim, he was more concerned that she was not in compliance with Islamic law by not wearing her veil.
How deep the blindness and deception!!
Yet, let's not be too harsh on the Mullah. All of us can fall victim to the blindness of religion. We need to take seriously God's command and what he requires of us.
Micah 6:8 is God's prescription that will keep us safe from this blindness:

"He has told you, O man, what is good, and what does the Lord require of you but to do justice, and to love kindness and to walk humbly with your God."

We can be safe from religious blindness if we practice what Micah tells us by having a heart of mercy and humility. Have you examined your heart today?