Until the whole world hears


"Worthy are you to take the scroll and to open its seals,
for you were slain, and by your blood,
you ransomed people for God, from every tribe
and language and people and nation..."
(Revelation 5:9)

One of my favorite Contemporary Christian artists is Casting crowns. In a powerful music video, the band can be seen on a rooftop at sunrise, performing one of their best songs that describes the joy and excitement of proclaiming the good news of Christ. Right below the band is a large crowd that has gathered to join them in singing, "Until the whole world hears."
"Until the whole world hears, Lord we are crying out. Lifting up your name for all to hear the sound. Like voices in the wilderness we are crying out. Until the day draws near, we'll sing until the whole world hears."
This exciting and uplifting song by Casting Crowns is the first thing I thought of when I read about a Saudi-Arabian woman who had publicly announced her faith in Christ.
"I have left the darkness of Wahhabi Islam and entered the light of Christianity," 28 year old Maryam declared on a video seen by millions on the internet. She explained that Jesus had appeared to her in dream and gave her the name Maryam. In the video, Maryam proclaimed that she had forsaken Islam and converted to Christianity because of the treatment of women by the "morality police" in Saudi Arabia. As a result of the video, Saudi officials are outraged and promise to put an end to Christian evangelism. In order to protect her identity and her life, Maryam has decided to continue wearing her hijab.
I am inspired and in awe of Maryam's courage. She lives in the country that gave birth to the prophet Muhammed and the religion of Islam. She has put her life on the line and declared to the whole world that she's willing to pay the price for following Jesus.
Maryam's decision to leave Islam is not without consequences. Saudi Arabia adheres to strict Sharia law. Women have few rights and are treated as possessions. According to the Hadith, a large collection of sayings and actions of the prophet Muhammed, a Muslim does not have the freedom to leave Islam. 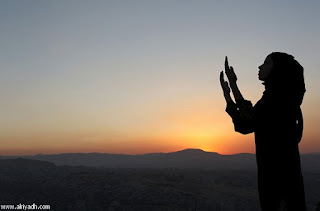 In Al Bukhary's translation (number 6922) the prophet Muhammed is reported as saying, "If any man change his religion, kill him!"  This statement reportedly declared by Muhammed actually contradicts the Quran which says in several suras that there is "no compulsion in religion."
What is is that attracted Maryam to Christianity? Many Muslim women who have come to faith in Christ say they left because when they read the Bible, they saw compassion and love in Jesus, something they had not experienced while they were in Islam.
Maryam is not ashamed to publicly declare her faith in Christ. She does so at the risk of her own life. Like the song by Casting crowns, she is "crying out until the whole world hears."
The whole world has heard her. Can you say the same about your testimony?