The Prayer Vigil: A Tsunami of God's Glory


Today, September 26, 2013 marked the one-year anniversary of Saeed Abedini's captivity in an Iranian prison.
It has been an incredible year for Saeed's wife Naghmeh as she worked non-stop day and night traveling all over the nation, giving interviews, appearing at fund raisers and speaking at the United Nations in Geneva.
Saeed's imprisonment has thrust Naghmeh into becoming a single mom for her children, Rebekkah age 7 and Jacob age 5.
This courageous "single mom" spent the last three months organizing a world-wide prayer vigil that went way beyond anyone's expectations. Over 70 cities hosted groups of loyal Christians gathering at their state capitols and government centers to cry out to God for Saeed's release. Amazingly, the prayer vigil was not restricted to the United States alone but extended out as far as East Jerusalem and the country of Spain to name just a few!
Leading up to this very special day, Naghmeh was able to hand deliver a letter written by Saeed to the delegation of Iranian President Hassan Rouhani. President Rouhani just happened to be staying at the same hotel as Naghmeh. To add to the list of unbelievable occurrences this week, world renowned evangelist and statesman, the Rev. Billy Graham, now 95, wrote a special letter to the president of Iran, pleading for Saeed's freedom.
This incredible, emotional week for Naghmeh culminated today in the worldwide prayer vigil.
As I sat in front of my computer today, worshiping to songs by Chris Tomlin and praying for Saeed and Naghmeh, suddenly I experienced what I can best describe as a vision of the effect of thousands of Christians praying! I rarely have experiences like these so I was totally taken by surprise. I saw "in the spirit" a huge wave, like a tsumani, towering hundreds of feet into the air and washing over everything in its path. Then I heard a "still small voice," which turned out to be an exhortation, an encouragement for Christians participating in the vigil all over the world. I immediately downloaded a picture of the wave that I saw in my "vision and quickly began typing out what I heard the Lord speaking to me. I have never done this before and I was both excited and fearful!
Here is what the Lord gave me for Naghmeh and all Christians participating the prayer vigil today:

"As you pray today, as you raise your hands and hearts to surrender to me, I will unleash an unstoppable wave of my glory..I will unleash a wave of my power for you.
This is a wave of cleansing, a wave of My glory that will cover the whole earth.. a wave of unstoppable love to melt the hardest of hearts..it is a tsunami of My glory.
Come..come now and jump into this wave..ride this wave of my glory..be cleansed..be refreshed.
As you pray today, I'm coming to you as a wave..prison walls are falling..hearts are being cleansed.
\There is no stopping my wave. I will speak to the nations..This is My glory wave..
So lift your hearts and voices...I'm answering your prayers..I will confound the enemy..The battles is mine..prisoners will be freed today!"

When I finished typing, I was astonished at what I wrote! This very rarely happens to me. I am humbled by this powerful word that God gave me. As I carefully read it, Im not surprised! This is consistent with the character of God. He wants to encourage all of us who have been working so hard together with Naghmeh to keep Saeed's perilous situation alive in both the media and government.
There is enormous power in prayer when Christians come together with one heart and mind and spirit and cry out to God! God desires to answer the prayers of His children. For His sovereign purposes God delights in using the prayers of His children to shape history. One of the many "pictures" of the character of God in the Scriptures is that of a well of living water that quenches the thirst of spiritual seekers. It is easy to understand that God describes himself like a wave washing over the earth and cleansing our hearts. He is the living water, the mighty wave that is unstoppable, a wave of unconditional love cleansing us from our guilt and shame.
Prayer is powerful because it is ordained by God in our hearts. The Bible proclaims in James 5:20 that, "the earnest prayer of a righteous person has great power and produces wonderful results,"
(NLT)
It was a beautiful sight today to see our elected officials in Congress on their knees praying for Saeed's freedom. The mighty wave of God's spirit was indeed washing over the hearts of thousands, perhaps millions of Christians today as they set aside an hour of their busy life to cry out to God.
God visited each of us today in a profound way. Has His mighty wave visited your life yet?
He is the well of living water. Drink from his well today. You will never be thirsty again! 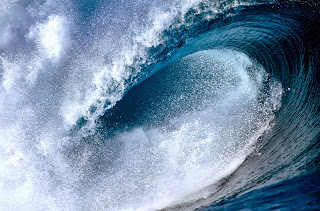 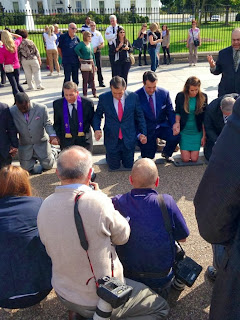