Donya Jam: Being a voice for the voiceless


Donya Jam is an Iranian-American human rights activist and also a dear friend of mine. She dedicates all of her passion and energy to writing and protesting against the current regime in Iran. I have had the pleasure of interviewing Donya on my radio program. Recently she attended the annual "Free Iran Rally" in Paris. The story you are about to read appears in my book, "The Cross in the Desert: Speaking hope and freedom to Iran."

Donya is one of my newest Iranian friends. She is an Iranian American who uses her freedom in a very unique way. Persian names have very special meanings that relate to one’s lifestyle. The name, “Donya” in Persian literally means, “world.” The meaning of Donya’s name fits perfectly with who Donya is. Donya is a powerful voice of hope for the world and most importantly for her people, her friends, her family, that still live under the oppression and fear of the Iranian Regime. Donya and her family have not forgotten their people. Just recently at a demonstration in front of the White House, Donya joined a group of protesters from “Iran resistance” to denounce and speak out against the increase of executions since Rouhani became President of Iran. One of her favorite Scriptures is Proverbs 31:8, which commands us to, “Speak up for those who cannot speak for themselves.” Donya is a voice of hope for Iranians, who because of imprisonment, torture and death, have to remain silent for fear of their lives.
I recently asked Donya to share her story so that her voice would be heard all over the world through my books. This is Donya’s story in her own words:

Since the barbaric regime of Iran came into power in 1979, there have been nonstop executions and torture against the Iranian people. Shortly after the Revolution, its war against Christians began. A Christian Pastor by the name of Arasto Sayaah was killed by the Iranian Regime. Bahram William Dehqani-Tafti was another Christian shot to death by the Iranian Regime. Anyone who simply spoke their mind and did not agree with the regime was quickly arrested, thrown into jail, and put in danger of execution. Over 120,000 supporters of the Iranian Resistance, who supported 73 freedom and democracy for Iran, have been executed by the regime. My family had to flee from Iran because of their brutality. It was a very difficult decision. Either you start a new life as a refugee and face the difficulty it brings or live under barbaric cruelty. Life as a refugee has been very tough because you still feel the regime is trying to silence you. Since my family came out of Iran, Iran and the Iranian people are still in our hearts. My family and I continually think about the plight of the people of Iran. We began working with our Muslim friends side by side in the Senate, Congress and churches, speaking out and educating people about what is really happening inside of Iran. It is our responsibility as a Iranians to be a voice of hope for our people.
My mother is an Iranian-Christian pastor. My family is serving the Lord. I have been raised in the church and I remember asking my mom one day if I could be baptized. That was truly an amazing day! Now as a Christian and an Iranian, I do my very best to give Iranians a voice. The Bible says, “Speak up for those who cannot speak up for themselves,” (Proverbs 31:8) 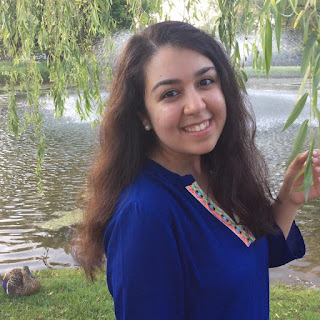 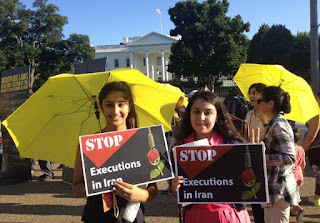 In September of this year, 2014, my family and I joined other protesters in confronting President Rouhani during his trip to the United Nations. Just recently, we attended a demonstration in front of the White House to protest against executions in Iran. The Iranian Regime is a very dangerous terrorist entity in the Middle East, even aiding the blood-thirsty dictator, Bashar al-Assad in Syria. I believe that this regime cannot be reformed. They are playing political games with the world. It is very plain to see that since Rouhani became President of Iran, the executions have increased, averaging one execution every seven hours. There is only one solution for Iran and that is a democratic regime change by the Iranian people and its resistance movement led by Mrs. Maryam Rajavi. I pray and hope that very soon Iran will be freed from this evil regime and that one day a democratic government will be established
Posted by Randy L. Noble at 11:55 AM