Shima and Dariush, "Exiled to Turkey." 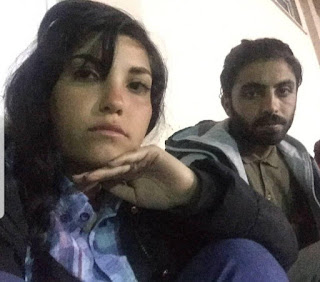 I'm Shima Babaei, a 24-year-old Iranian human rights activist. I was arrested several times by the security forces for my peaceful activities and sentenced to six years in prison. At the present time, I’m living in Turkey as a refugee with my husband Dariush Zand, who is also a human rights activist. Unfortunately, we have both been forced to leave our country for our safety.

I was in the first year of my high school when the bloody election protests of 2009 began in Iran. I was fifteen years old at the time. My father, who has an extensive background of arrests and torture due to his activism, had recently been arrested once again, after the interrogators forced his friend to confess to them about his political activities.

My father had been in solitary confinement for four months and was severely tortured.  During those four months, we had been deprived from visiting him. Watching him suffer had a huge impact on me. I became familiar with the meaning of the words, injustice, oppression, and torture. His imprisonment determined the path for the rest of my life. I knew I could no longer be silent. I must stand up against oppression!  My activism began with writing anti-government slogans on the walls of my school. When I turned 17, I was outraged when watching the films of those killed in the 2009 protests, especially the death of Neda Agha-Soltan. I was so inspired by her courage that I wished that I could die like her in order for my country to gain freedom.

I remember that the first time I went with a friend to the gravesites of those killed in the 2009 protests, we were immediately arrested by government agents. We were interrogated for several hours and then transferred to Evin prison. They found out about my father’s background and forced me to sign a pledge to never engage in these activities again and then they released us.

A few weeks later, I decided I could not abide by this pledge and had to continue speaking out. I began attending the meetings of political activist Atena Daemi.  Atena was very outspoken against forced child labor and the death penalty. Unfortunately, our meetings were raided by government agents and five of my best friends were arrested. However, since I was employed at the time and unable to attend all of the meetings, I was very fortunate to escape arrest.

My first official detention took place in 2016. I was transferred to solitary confinement by the Revolutionary Guards and subjected to several days of intense interrogation and psychological torture. Due to intense pressure by the Media, I was released.

My last arrest by the Ministry of Intelligence took place in 2018. I was transferred to Evin Prison and kept in solitary confinement. My husband, Dariush had also been arrested and sent to prison by security forces. Upon my arrival to prison, a prison officer demanded me to remove my clothes and get naked. When I resisted, she violently ripped my clothes off and gave me a pair of dirty prison garments to wear. One of my biggest problems in prison was insomnia. They refused to give me any drugs, but toward the end they began injecting me with an unknown drug that caused me to be extremely ill.

During the interrogations I was blindfolded and only allowed to raise it up from covering my eyes in order to write down the answers to their questions. I was in Ward 2A and every morning after breakfast I was escorted to the detention room for another 10-hour day of grueling interrogations. During my eight-day imprisonment, I was interrogated for 80 hours by the IRGC (Iran Revolutionary Guard) After my temporary release, I was summoned to the IRGC’s Provisional Bureau twelve times and interrogated face to face for three to four hours at a time. Fortunately, I was not physically beaten, but my interrogator would severely kick the base of the chair I was sitting on and strike me in the head with his pen, demanding me to write out my confession of political activities. After my release I couldn’t trust anyone and became paranoid that security guards were eavesdropping on my conversations. I isolated myself from people at this time and became depressed because of the trauma I had endured.

I could see myself sitting in the cold and in the darkness, waiting for my husband to be released from prison. I anxiously paced back and forth in the waiting room and suddenly saw my father rushing towards me. I saw intense sadness in my mother’s eyes as she extended her hand toward me. I looked down and saw myself handcuffed and began running in fear. I gasped for breath and suddenly awoke. Darius was tugging at my clothes, struggling to wake me up from my nightmare!

“The smuggler is here. We must go!”

I forced myself to get up because of my husband’s urgings, but I didn’t want to go! I was hoping someone would come and say, “You can both stay in Iran. There is no danger for you!” All I wanted to do was hug my mother and cry, but reality set in and we both quickly left with the smuggler.

The smuggler had to leave us in the border mountains of Iran and Turkey and we were arrested by border guards. This was the darkest trial of my life. I had resisted leaving my homeland and now once again I had been arrested. After five days we were both handed over to the Immigration Police. Dariush and I were separated. For one month, I couldn’t eat and became violently ill. The horrifying reality of being deported back to Iran took a heavy psychological toll on me. It was because of the Islamic Republic that we had been banned from education, tortured and arrested. Our lives had become a living hell!

Finally, after six months, we were released and agreed to seek asylum. However, now we have become second class citizens in Turkey and forced to find work on the black market. We have no idea how long our stay in Turkey will be. There are many Iranians presently living here and sometimes it takes up to four years before they can find a country that will sponsor them. The Islamic Republic of Iran has made us prisoners. Darisuh and I are fighting every day to tear down the walls of this big prison and achieve freedom.
Posted by Randy L. Noble at 6:40 PM