A Hunger for Justice and Freedom


"God Blesses those who hunger and thirst for justice:
for they will be satisfied."
(Jesus: Matthew 5:6. Sermon on the mount)


I remember working at the hospital when I discovered the good news on my cell phone.
"Nasrin Sotoudeh ends her 49 day hunger strike after Iranian officials agree to her demands."
I quickly took a second look to make sure I wasn't dreaming. Its not everyday that the government of Iran listens or agrees to the demands of political prisoners. Yes, it was really true! I wasn't dreaming after all. Tears of joy flooded my eyes. I rejoiced! I was so happy! I hurriedly posted the news on my Facebook page.
For almost 50 long and emotionally difficult days, imprisoned human rights attorney, Nasrin Sotoudeh, courageously challenged the unjust restrictions the government of Iran had put on her family. Nasrin was now in her third year of serving a six year sentence in Evin Prison for defending the rights of protesters and speaking out against juvenile executions. Iranian officials had not been satisfied to just punish Nasrin. Now they were placing travel restrictions on her 12 year-old daughter Mehraveh and barring her visitations with the rest of her family.
There is a limit to how much a person can stand by and watch a government oppress and violate the basic rights of human beings. All of her life, Nasrin had come to the rescue of the oppressed and stood in their defense. Now even behind bars, she fearlessly stood up against the system that had imprisoned her and challenged them to a contest of wills. And Nasrin won!!
It was a very long and difficult battle. Her husband Reza many times tried to persuade her to give up the hunger strike. Yet Nasrin remained defiant and unmovable.
Now I understand why I dedicated my new book, "The Rose of Nowruz: dreams of hope and freedom," to this incredibly courageous lady. 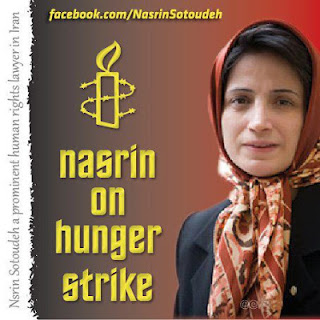 There were many Twitter storm events for Nasrin, many, many countless prayers on her behalf. Everyday on my facebook page, I posted the latest news about her hunger strike. There is a very important principle to what Nasrin did. Jesus promised in his famous sermon on the mount, that God blesses those who hunger for justice. Nasrin's hunger strike was more than simply doing without food to get a corrupt government's attention. It was a hunger for justice, a hunger for freedom and I truly believe God rewarded her courage and compassion  He showed Nasrin and her family mercy and moved on the hearts of the Iranian prison officials.
Certainly there are more battles and hurdles for Nasrin to overcome. She is still being unjustly held behind bars and even after her release she will be prohibited from practicing law for several years.
Nasrin has inspired me that the hunger for justice and freedom can be won, but its a very long and difficult mountain to climb.
Yet God promises us He is with us. We're not alone. He will bless our efforts and we will be satisfied.
If you hunger for justice, I hope your role model is Nasrin Sotoudeh. She is a shining star in the darkness of Iran.

Randy, I feel blessed to have met you in person. You are such an inspiration. God bless you for all you do!