A campaign of Hatred 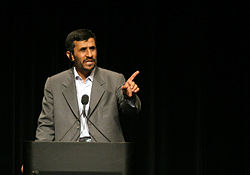 "I Will bless them that bless you and him who dishonors you I will curse and in you all the families of the earth shall be blessed."
(Genesis 12:3)

""Israel must be wiped off the map!"  "The holocaust is a myth. They invented the myth of the massacre of the Jews and placed it above Allah, religions and the prophets"
Iranian President Ahmadinejad is busy conducting a campaign of hatred toward Israel. These and many other declarations of hate have been made by him in speeches since he was elected President in 2005. According to Ahmadinejad, the goal of their recent nuclear buildup is to "pave the way for the reappearance of the twelfth Imam, The Mahdi " who will make Islam the dominating force and religion in the entire world.
Thousands of years ago, God speaking through the Prophet Zechariah, prophesied that, "Behold I will make Jerusalem a cup of trembling  unto all the people round about, and in that day, I will make Jerusalem a burdensome stone for all people." (Zechariah Chapter 12, verse 3)
This prophecy has certainly come true. The focus of the world is upon the nation of Israel as she fights for her very existence against terrorists who are determined to wipe her off the face of the earth. In Genesis 12:3 God  outlines His response to the treatment of other nations against His chosen people. I will Bless them that bless you and curse them that curse you." Its that simple!
In the violent climate of intolerance and anti-semitism, I recently published my new book, "The Promise: We will meet again."  The Promise is the story of Hannah and Rachel, two young young Jewish girls whose friendship endures the darkness and horror of the holocaust. Its a story of the triumph of love and faith in spite of the cruelty and hatred of the Germans. The Germans tried to wipe out the Jewish race and failed. God preserved them to prove that any nation whose foundation is built on cruelty and hatred will crumble. His promise to curse them that curse Israel became a living reality to Germany.
The amazing irony in all of this is that my Iranian friends are reading my new book, "The Promise." Unlike their President, they are tolerant and open-minded and desire to understand the horrors of the holocaust that Ahmadinejad dismisses as a myth!
God will certainly bless my Iranian friends for their kindness and sympathy towards the Jewish people. They are not like their President whose goal and ambition is to wipe Israel off of the map.
I encourage you to read my new book, "The Promise: We will meet again." I believe that you will conclude that the holocaust was anything but a myth. It was the darkest hour of Israel's existence but God triumphed in the end and brought beauty out of the ashes of their suffering.
Posted by Randy L. Noble at 7:11 AM