"He will rescue the poor when they cry to him.
He will help the oppressed, who have no one to defend them."
(Psalm 72: verse 12)

"And the government: of the people, by the people, for the people, shall not perish from the earth."
These famous words, known as the Gettysburg Address, were proclaimed by President Abraham Lincoln during the one of the bloodiest battles of our nation at the time of the Civil War.
This declaration uttered by President Lincoln contains the core principles that establish and govern a true democracy and serve as a model throughout the world of what true government looks like.
I have a friend named Sahar who lives in Tehran, Iran. Her dream is that one day she will live to see a Free Iran that is free from oppression and tyranny and is governed by these principles.
Freedom. My Iranian friends long for true freedom where they are free to assemble, think and speak without fear of imprisonment and torture. Since the 2009 Election in Tehran where there was bloodshed and violence, there have been thousands of arrests, hundreds of deaths and to date there is still over 600 political prisoners still imprisoned. Just recently in the national news, Iran is determinded to execute a Christian Pastor, Youcef Nadarkhani. What is his crime? Converting from Islam to Christianity. In Iran that is known as the sin of apostasy which is punishable by death from hanging.
A well known Woman's rights activist, Bahareh Hedayat, is serving a nine-year sentence in Evin Prison for protesting for equal rights for women. And the list goes on.
The oppressive tactics of the government in Iran seek to put an end to peaceful protests, rallys and assemblies and those who participate are caught and arrested and undergo psychological torture and solitary confinement in prison.
What then is the answer to this government oppression? The first response is to speak out and refuse to be silent and bullied by an oppressive government. The second is prayer. Psalm 72, verse 12 reveals that God indeed hears the cry of the oppressed and will defend their cause. God is there and He is not silent as the late famous Christian Theologian Francis Scaheffer once proclaimed.
A true government is for the people, establishing laws for protecting society and defending them against evildoers. Government is by the people. We have the right to vote and choose our leaders and if they fail to do the job, we can fire them. Government is for the people. True government is a servant for the well being and prosperity of our society.
The famous words of Abraham Lincoln still serve today as a true model of how government should function. My Iranian friends are crying out for this type of government in Iran. They long for what you and me take so much for granted. Democracy! 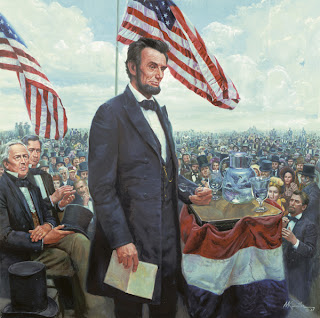 Lets speak out for freedom and democracy and most importantly, let's pray. If we do these things, My Iranian friend Sahar will one day realize her dream come true for a Free Iran. Lets let our prayers and voices be heard!
Posted by Randy L. Noble at 1:34 PM