My latest blog is an excerpt from my book, "Broken yet beautiful: Rising up from their ashes."

Women are rising up and becoming bolder, speaking out against psychological and physical abuse that is running rampant in the church. This is completely unacceptable that the "Bride of Christ" should treat its women in such a horrific way. One of the hot button issues in the church is the doctrine of submission that has been twisted in an abusive way treating women like a doormat. I pray that this article will breathe life and bring freedom to oppressed women that in most cases remain silent and afraid.

“Don’t get drunk with wine, which produces depravity. Instead be filled with the Spirit in the following ways:  Speak to each other with psalms, hymns, and spiritual songs; sing and make music to the Lord in your hearts; always give thanks to God the Father for everything in the name of our Lord Jesus Christ; and submit to each other out of respect for Christ.  For example, wives should submit to their husbands as if to the Lord. A husband is the head of his wife like Christ is the head of the church, that is the savior of the body. So, wives submit to their husbands in everything like the church submits to Christ. As for husbands, love your wife just like Christ loved the church and gave himself for her…….”

Submission is a term that has been greatly misused by the church, resulting in control and abuse against women. It has been manipulated out of context to elevate one person over another, wrongly putting a woman in inferior subjugation to her husband. It’s very important from the very outset to give a Biblical definition to the word, submission.

It is very enlightening to discover the German translation of the word submission, refers to the sharing of tasks, to support. A perfect way to sum up what Biblical submission means in context is, the Christian grace of voluntarily yielding one’s preferences to another.

Paul points out in verse 21, “submit to each other out of respect for Christ.”

This verse describes submission as volitional, submitting to each other in order to reflect the character of Christ. When Paul used this “hot button” word, submission, he was giving Christians a way of coping with a culture that was hostile to Christ. In the ancient world, women did not have an abundance of rights. They were not considered equal to men. When Paul commands husbands and wives to submit to each other, he was teaching a new and revolutionary concept.

This concept was contrary to the household codes of Paul’s day in both Rome and Greece. Wives in the ancient culture were little more than possessions of the husband. Slaves had no rights except what their masters gave to them. Therefore, when Paul commands, “husbands love your wives just like Christ loved the church and gave himself for her, (verse 25) he was giving a command that went competently contrary to the accepted norm of the day. In the ancient household codes, the husband acted as the Lord and had the final word in everything. For Paul to tell the husband to love his wife, was a revolutionary new idea! This was a patriarchal society and the concept of partners in a marriage voluntarily submitting to one another was shocking! 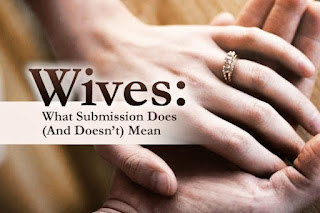 Ephesians Chapter 5 speaks of being filled with the spirit. If the marriage partners are both filled with spirit than they will be subject to each other and clothed in humility. There is a mutual respect for one another. True submission has nothing to do with the giving up of one’s rights. Referring back to the Greek word, hupotasso, submission in context means, “to support, uphold, cooperate, and giving in.”

This meaning paints a beautiful picture of husbands and wives supporting one another in the spirit of love and unity. Christ is the real “spiritual head,” with whom all authority rests. Marriage has never been meant to be a power struggle with the idea of one person being in charge. Instead, the male and female are meant to exist in a covenant commitment to each other, in which the two become one through mutual love, support, and respect.

At the heart of submission is the deliberate surrender of power. Our motives for such submission to one another is “out of reverence for Christ” (verse 21) The prime example of this is Jesus in the incarnation, when he voluntarily relinquished his power in becoming one of us and died in our place, (Phil. 2:5-8) We imitate him by letting go of power and exercising humility in our relationships.

In the ancient patriarchal society, the image of the husband was one of being in control and in charge. Here in Ephesians Chapter 5, Paul challenges that false concept with the truth of God’s word. He elevates the wife and charges the husband to love her sacrificially. It was a radical new concept for that day. Unfortunately, the traditional understanding of submission being taught today is more reflective of the ancient culture rather than what the Bible teaches.

The church needs to return to the Biblical model of submission which is one of voluntarily yielding to one another in respect and devotion!